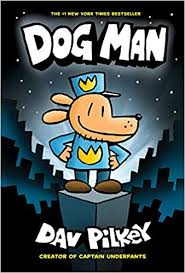 Scholastic, the global children’s publishing, education and media company, today announced the title of the new book in the worldwide bestselling Dog Man series. Dog Man: Grime and Punishment, a new installment in the critically-acclaimed series by Dav Pilkey, will be published on September 1, 2020. The forthcoming Dog Man novel, Dog Man: Fetch-22, releases today with a 5 million copy first printing.

Dog Man: For Whom the Ball Rolls, published on August 13, 2019, debuted at #1 on the USA Today, Wall Street Journal, Publishers Weekly, and The New York Times bestseller lists, and was the #1 bestselling book overall (children’s and adult books combined) in the U.S. for four straight weeks. Since the first Dog Man book was published in Fall 2016, the series has more than 26 million copies in print to date with 35 foreign language editions available. Dog Man: The Musical from Theaterworks USA, the musical adaptation inspired by the books, debuted this past summer at the Lucille Lortel Theater in New York City, and is currently touring in North America through next year.

Dav Pilkey, the Caldecott Honor-winning artist and #1 New York Times bestselling author, was recently named one of Fast Company magazine’s “Most Productive People.” Pilkey concluded his Dog Man “Do Good” Global Tour appearing at sold-out venues including arenas, theaters, schools, military bases, and libraries across the U.S. Inspired by the theme and characters in the Dog Man series, each large-scale event featured a charitable component benefiting local literacy and nonprofit organizations to highlight the importance of doing good and to inspire readers to make a positive impact in their communities. For the first time, Dav Pilkey also toured in Asia where he appeared at multiple events in China, Singapore, and India.

With its trademark humor and heart, Dog Man was an instant #1 New York Times bestseller, appealing to kids and critics alike. Publishers Weekly hailed Dog Man in a starred review, “Readers (of any age) will be giggling from start to finish.” Booklist, in a starred review, said “Pilkey has once again fired an arrow of joy straight at the fevered childhood psyche of millions of readers…an utter, unfettered delight.” Kirkus, also in a starred review, called Dog Man “riotously funny and original.” The Washington Post called Dav Pilkey “a rock star,” and the San Francisco Chronicle praised Dog Man as “hilarious, clever, and just right for kids of all ages.”

Dog Man follows the adventures of a lovable canine superhero who’s part dog and part policeman. With each Dog Man book, readers see the growth and development of the main narrators George and Harold through their comics. Their artwork, grammar, as well as their spelling improve as the series progresses. The series also explores universal themes and positive messages including empathy, compassion, striving to become a better version of one’s self, as well as the importance of doing good.

In addition to the Dog Man and Captain Underpants series, Dav Pilkey is the author and illustrator of over 60 books including The Paperboy which won a prestigious Caldecott Honor, Dog Breath which won a California Young Reader Medal, ‘Twas the Night Before Thanksgiving, God Bless the Gargoyles, and the Dragon series. When Dav Pilkey was in second grade, he was diagnosed with dyslexia and what is now widely known as Attention Deficit Hyperactivity Disorder (ADHD). Because of his learning and behavioral issues in school, he was often sent out in the hallway by his teachers. It was in his elementary school hallway where Dav created comic books about superheroes that eventually became Dog Man and Captain Underpants.

Jocie McKadehttps://www.jociemckade.com/
Her fiction writing has received the Author / Ambassador at Library Journal Self-e Authors, Winner Queen of the West Reader Favorite Award, Amazon Bestseller - Historical, Double finalist in the Next Generation Indie Book Awards in the Mystery and Humorous Categories. Writing humorous cozy mysteries and romantic comedy, Jocie can find humor in most everything, even when she shouldn't. She lives in the Midwest on Dust Bunny Farm with her family.
Previous articleJimmy Kimmel’s Debut Children’s Picture Book Reminds Us to Be Silly in a Serious Way
Next articleBook Review: “The Charlemagne Pursuit” by Steve Berry