Welcome Tom, we’re excited to have you on Reader’s Entertainment. Let’s start by getting to know a bit about you. Where you’re from, where you live? Is writing your full-time job?

I currently live outside of Dallas, but I’ve lived all over the Southeast. Nashville, Orlando, Memphis, and as far into the frozen North as St. Louis and Evansville. Writing is more of a part-time gig (do people still say “gig”?) for me these days.

I’ve been writing for probably 7 or 8 years. It was one of those things I kind of stumbled into, and it took off from there. My first woeful attempt at a novel has long since been deleted from existence (I hope), and the journey to Network of Deceit has been a long road, but one I’ve enjoyed travelling.

Wake up. Get coffee. Search for excuse not to write. Can’t find excuse so search harder. Give up and get more coffee. Write.

Seriously, I try to write to a time limit. Word counts don’t work for me, so I block out the internet, put on some headphones and music, and go for a set amount of time.

Network of Deceit is the sequel to Collision of Lies. The book is the ongoing story of Amara Alvarez, a police detective in San Antonio. This time around, she gets what she’s wanted . . . a position in Homicide. She soon learns the truth of that adage about being careful what you wish for. As with all my books, it’s clean suspense. No profanity or overt sexual situations. There might be a touch of gore (i.e., reality) now and then, but nothing too graphic.

Actually, the plot has been swirling around in my mind for years. My wife and I drove past an old waterpark years ago that was closed for the winter. As a writer of police procedurals, naturally my first thought was what a great place that would be to hide a body. That’s not what happens in the book, but it’s where the story began. And it also gives you insight into how my mind works. It’s a scary place. Don’t go there.

Sure. In the novels, Amara has a partner whose nickname is Starsky. One of Amara’s goals is to find out why everyone calls him that. Obviously, it’s from the old TV series Starsky & Hutch, but he looks nothing like the guy. I’ve been asked many times why Starsky is his nickname.

Oh, was I supposed to answer that too? Fine. Yes, I know why that’s his nickname. No, I won’t tell you. I haven’t decided if I’ll reveal it in a later book or if it’s something I’ll keep between Starsky and me.

Probably Douglas Pritchard, the Medical Examiner in the Amara Alvarez books. He’s a fun, quirky character. Not sure I’d want to be him for more than a day though. His social skills are, um, subpar?

I was a big Tom Clancy fan for a long time. I found his stories to be exciting and I liked his characters, but his tendency to get bogged down in technological details eventually wore me down. Ken Follett’s Pillars of the Earth is a favorite of mine. The characters and setting are fantastic, and the story moves at a good pace.

Pizza. No, Mexican. Wait, ice cream. Unless Chick-fil-A is open.

What is the one question you never get asked in interviews, but wish you did? Ask and answer it.

How do you maintain your boyish good looks?

HA! Great interview Tom, thanks so much for joining us today!! 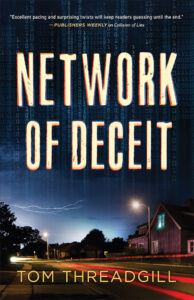 After her rescue of nearly fifty kidnapped children made international headlines, Amara Alvarez gets what she’s worked for: a transfer to San Antonio’s Homicide Division. Reality sets in quickly, though, as her first case, the suspicious death of a teenager at a crowded local water park, brings chaos to her personal life.

As the investigation moves forward and she increases the pressure on the suspects, Amara finds herself under attack by cybercriminals. Her every move is being potentially watched online, and she’s forced to resort to unconventional methods to find the killer. With few leads, she fights to keep her first murder investigation from ending up in the cold case files.

ABOUT THE AUTHOR:
Tom Threadgill is a full-time author and a member of American Christian Fiction
Writers (ACFW) and the International Thriller Writers (ITW). The author of Collision
of Lies, Tom lives with his wife near Dallas, Texas. Learn more at
www.tomthreadgill.com.