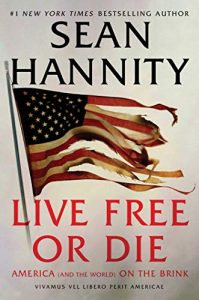 Threshold Editions, an imprint of Simon & Schuster, will publish Sean Hannity’s LIVE FREE OR DIE: America (and the World) on the Brink.

America’s top-rated news and radio host and #1 New York Times bestselling author offers his first book in ten years: a look at America’s fight against those who would reverse our tradition of freedom—a fight that Hannity says we’re dangerously close to losing in 2020.

Ronald Reagan once said, “Freedom is but one generation away from extinction,” and, for Hannity, his words have never rung truer.  In LIVE FREE OR DIE, Sean will walk readers through a concise ideological history of America to demonstrate how we arrived at this moment of brinksmanship and why now is an All Hands on Deck moment to save the Republic. He delineates the multiple fronts on which we must fight back against the tactics of the left, and how the future of American freedom rests on Donald Trump’s reelection.

Sean Hannity is the host of Hannity on the Fox News Channel (weeknights at 9PM/ET) and the nationally syndicated radio program The Sean Hannity Show.  He is the author of three New York Times bestsellers—Conservative Victory, Deliver Us From Evil, and Let Freedom Ring.

Simon and Schuster will also publish the audio edition, which the author will read.  Threshold Editions will publish LIVE FREE OR DIE on August 4, 2020.

Jocie McKadehttps://www.jociemckade.com/
Her fiction writing has received the Author / Ambassador at Library Journal Self-e Authors, Winner Queen of the West Reader Favorite Award, Amazon Bestseller - Historical, Double finalist in the Next Generation Indie Book Awards in the Mystery and Humorous Categories. Writing humorous cozy mysteries and romantic comedy, Jocie can find humor in most everything, even when she shouldn't. She lives in the Midwest on Dust Bunny Farm with her family.
Previous articleNow Playing Presents: Christine Feehan Book Trailers
Next articleHolly’s Book Review: The Major’s Daughter by Regina Jennings