Interview with author of What Momma Left Behind Cindy K. Sproles

Interview with the author of What Momma Left Behind Cindy K. Sproles

An Endearing Tale of Courage and Perseverance Set against Insurmountable Odds

“Cindy writes from the heart about the people she knows, in the place where she lives, all on journeys of faith and ultimately redemption.” —Adriana Trigiani, New York Times bestselling author of Big Stone Gap

Set in the late 1800s, What Momma Left Behind is a tender novel full of sacrifice, heartache, and bravery. The Appalachian Mountain community of Sourwood, Tennessee, has been ravaged by death and disease, leaving many orphans behind. When Worie Dressar’s mother dies suddenly, Worie is inundated with orphaned children who keep showing up at her door. With barely any resources of her own, Worie must figure out how and why her mother was able to care for these little ones. As Worie fights to save her home from a good-for-nothing brother, she will discover the beauty of unconditional love and the power of forgiveness as she cares for all of Momma’s children.

Welcome, Cindy.  Can you provide a brief description of your new book, What Momma Left Behind?
This book addresses an issue found in the Appalachian Mountains in the late 1800s—the number of children left as orphans due to illness. What I love about this book is that it shows how the mountain people step up to care for the children, even when the children aren’t their own. There was always a Christlike desire to care for the poor, the widows, and the children. What Momma Left Behind is one young woman’s desire to do what needs to be done to protect these children, never realizing the twists and turns it will bring into her own life. 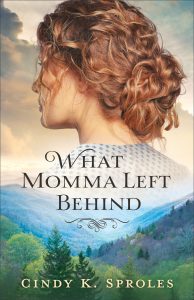 What Momma Left Behind addresses the topic of adoption. Can you expound on what adoption looked like in the 1800s compared to now?
In the deep mountains, adoption wasn’t an official (legal-signing) thing. Many times folks would see a need and try to fill it, often bringing homeless children into their own families, especially if there was illness or a lack of food. It was not uncommon for families to either bring children into their homes or, if the children were old enough to fend for themselves, simply keep watch over them, making sure they had food and warmth in the winter. For example, my own father’s parents were both deceased by the time he was five years old. His oldest sister managed the household and cared for the younger children, with an aunt and uncle checking in from time to time.

The main protagonist, Worie Dressar, struggles to find a way to care for the growing number of orphans. Is there any historical information on how these orphans were cared for in these communities?
There were a few orphanages in larger cities. The orphan train was another method of caring for these orphans. They were placed on a train that made its way out west, stopping along the way and dropping children off for people to take in. Basically, they were cheap labor, but the mind-set was that they would have food, clothing, and shelter. In the deep mountains, a family member would take in the orphans or simply watch over them if there were older siblings who could manage the upkeep of the homestead and the children. There is little information, other than stories passed down, about care in the deep crevices of the mountains.

You set your novel in the Appalachian Mountains during the late 1800s. What motivated you to write about this place and time?
The Appalachian Mountains are home. The culture and the people of that time were strong, innovative individuals. Their lives were rough, but their sense of faith, family, and community was strong. I don’t want younger people to miss out on the hardships of these people or the amazing culture they nurtured.

What type of research was required to accurately portray this setting?
Since I live in the Appalachian Mountains, research is only a few miles away. I had personal interviews with elderly mountaineers who were children during that time frame, and family stories and experiences were passed down through the years. I took quick visits to local areas such as Chattanooga, Etowah, Gatlinburg, and Townsend, where the culture is still very thick and people are still willing to share information and stories. I also gleaned information from the Appalachian Studies program through East Tennessee State University.

During this era, dysentery and influenza ran rampant in the mountain communities. Why did these diseases affect adults more than children?
This is still a mystery. All we really have are stories and theories since medical records were not kept in the mountainous regions. What people tend to believe are two things: First, children worked closer to the home rather than out in the farther part of the fields, where ponds were dammed up and drinking water became stagnant. More adults would be in these areas and drinking from these ponds than children. Second, the old adage of “children should be seen and not heard” seemed to come into play. When there were gatherings of people, the children were shooed outside or away into the barns to play, so exposure was a bit less. When individuals were ill, children were once again sent out from under foot so the ill could be cared for without interruption. There was also the theory, though not a lot of proof to back it up, that children seemed to be a bit more resilient. Without medical records, there was little explanation. Doctors were far and few so when illness hit, families were at the mercy of their mountain grannies who wielded herbs, incantations, and wives’ tales to try to treat illness. When someone became seriously ill, death was imminent since there were very few medicines or doctors to help nurse them back to health.

There are a couple of underlying themes in this novel. Can you relay how these themes played a key role in Worie’s life?
First was her own fear of being alone—becoming an orphan. Worie was named appropriately, for she spent a good amount of time worrying about her mother, making sure she was not alone, and keeping up the farm when her brothers were away. Adoption weighed on her heart. She couldn’t bear the thought that these children who wandered to her door might be the one thing she feared—alone. Second, Worie had to learn to trust and seek to forgive when everything she had was taken away. Her family values, despite the trouble her brothers were, kept her pushing ahead, trying to do all she could to bring the family back together. Her deep-rooted desire to care for others caused her great discord internally. Worie had hopes and dreams, but she gave them up in the name of family. She learned the value of forgiveness, even when it is not accepted, and she learned that forgiveness was, more times than not, meant for her own peace of mind. She worked through the things she didn’t understand, and though she was unsure why, she held on to her faith, learning how God never stopped working in her life.

In addition to being an author, you also have a number of other positions. Can you tell readers how these roles have played a part in making you a better novelist?
I’ve been fortunate to spend quality time with much better writers than myself, learning from them, picking their brain, and accepting their guidance and advice. As a managing editor for a publisher, I’ve been blessed with opportunities to have these experiences. I’ve learned to persevere and take the falls and tumbles that come with rejection, knowing that those bloody knees bring about experience. Finally, practice, practice, practice—learning the craft of writing and honing it to write the best I can.

What are you working on next?
I am currently working on a ninety-day devotional entitled Meet God on the Mountain, and I am working on my fourth Appalachian historical novel.

Cindy Sproles is an author and speaker. She is the cofounder of Christian Devotions Ministries and the cowriter of the popular He Said, She Said Devotions written with her cofounder, Eddie Jones. She is a novelist and best-selling author. Cindy’s devotions and articles are published in Christian newspapers across the eastern seaboard, including having been used to represent legislature for protection of the elderly. She is a speaker to women’s conferences addressing not only the heart of women, but also their biblical responsibilities to their families. As a teacher and speaker for Christian Writers Conferences, Cindy teaches writing skills and how to write placing God in the forefront.  She is a contributing author to CBN.com and is the Executive Editor for www.christiandevotions.us and the Managing Editor for Lighthouse Publishing of the Carolinas’ imprints: SonRise Devotionals and Straight Street Books. She is a certified life coach and mentor, an eldercare specialist and a special needs advocate. Her book, New Sheets – Thirty Days to Refine You Into the Woman You Can Be is being used to help raise funds for Hope House, an abortion crisis center and her novel, Mercy’s Rain, is giving a voice to children who suffer sexual child abuse. Cindy is also the coauthor of He Said, She Said – A  Devotional Guide to Cultivating a Life of  Passion. She is the mother of four adult sons and  lives in the mountains of East Tennessee with her husband. Cindy can be contacted at www.cindysproles.com or by emailing cindyksproles@gmail.com.

Jocie McKadehttps://www.jociemckade.com/
Her fiction writing has received the Author / Ambassador at Library Journal Self-e Authors, Winner Queen of the West Reader Favorite Award, Amazon Bestseller - Historical, Double finalist in the Next Generation Indie Book Awards in the Mystery and Humorous Categories. Writing humorous cozy mysteries and romantic comedy, Jocie can find humor in most everything, even when she shouldn't. She lives in the Midwest on Dust Bunny Farm with her family.
Previous articleBook Lights Radio with Lisa Kessler and Author Louisa Bacio
Next articleMike Pihlman Reviews Thrillers: Black List by Brad Thor