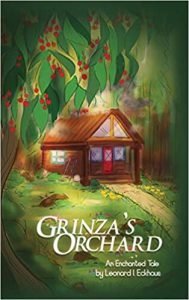 Grinza’s Orchard is a young adult novel that’s more of a fable. It’s written like a fable, following the life and adventures of a young Romani (she is referred to in the book as a Gypsy) girl. This is partially a coming of age story though it is also packed full of lessons she learns along the way.

There is a love story and I enjoyed that. I also liked how Grinza’s parents allowed her to follow her own path as opposed to following tradition and arranging a marriage for her.

A lot of the story is “tell” and not “show” and though that’s often a problem with a normal novel, since this is more of a fable with a storyteller POV it worked. I wasn’t entirely certain who the target audience was though.  Thre are illustrations introducing each chapter which are lovely. Some of the themes are more mature though. I’m going to guess age 12 and up is fair.  The author says 8 to 100 but I’m not sure. I guess it’s according to how mature your 8-year-old is.

I did enjoy learning the Romani/Gypsy language and about that culture. Though I thought the term “gypsy” isn’t PC anymore. Perhaps, in context, this is.

If you love fable tales of adventure and romance this could be the book for you! 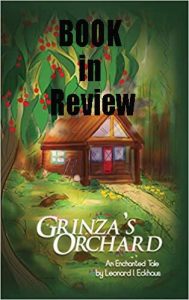 Here’s the back cover copy –

Grinza’s Orchard is the story of a Gypsy girl growing up in the early 1900’s in Romania. At five years old she is gifted her own cherry tree and it becomes the centerpiece of the story as she grows up dreaming of one day having her own full-blown cherry orchard. To deal with some of the problems that she faces such as an unwanted boy who is attracted to her, a terribly hard decision she has to make to save her parents from illness during the coldest winter on record in their village, achieving her life’s dream of having her own cherry orchard and then suddenly losing it, she seeks help with visits to the witch Auntie Angelina and the Guru Sylvanus, who lives in a cave atop a nearby mountain. The story follows Grinza, her husband Clopin, and their children’s lives in the small gypsy village of Cojasca.

You will fall in love with Grinza…

Laugh with her as she is willing to try anything to get rid of her freckles… cry with her as she gives up her greatest possession to save her parents… cheer for her as she reaches her lifelong dream… and follow her as she grows up, gets married and has children of her own.

Here's our interview with Blaine Stewart on Hourglass Socioeconomics: Principles & Fundamentals. https://youtu.be/ELHangieSL4 We can not sustain a system where a river runs into a wasteland...
Read more