AUTHORS AND THEIR HOBBIES: MJ PRESTON

In Focus with MJ Preston

Aside from writing novels about serial killers and creatures that move in the shadows, I also have a love for photography. I picked up on this hobby back in 2011, after my son and wife bought me a Canon Rebel T-3.  I carried this trusty camera everywhere looking for subjects of opportunity. My indoctrination into the world of amateur photography began on the world’s longest ice road, where I shot thousands of pictures. I’ve included a few of those shots for your pleasure. I also shot everything that caught my eye, from prairie landscape, to summer northern lights in the Northwest Territories and even apocalyptic cows. Photography has become a great love, one that I never have enough time to do, but I savor those occasions when I can. These photos inspire my writing, and some have even translated into cover art for some of my written work

I hope you enjoy viewing these random pictures as much as I have enjoyed capturing them. If you would like to see more, please visit my Flickr page at:

Taken on November 21, 2012: A Super B Fuel Tanker, bound for Yellowknife, departs the Ferry, Merv Hardie, after crossing the McKenzie River/ capture by MJ Preston 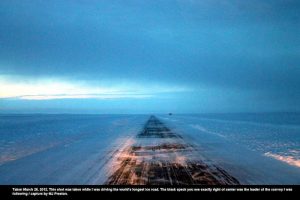 Taken March 26, 2012. This shot was taken while I was driving the world’s longest ice road. The black speck you see exactly right of center was the leader of the convoy I was following / capture by MJ Preston. 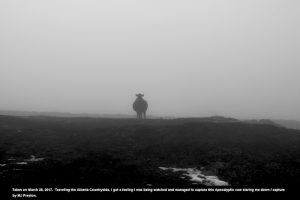 Taken on March 28, 2017.  Traveling the Alberta Countryside, I got a feeling I was being watched and managed to capture this Apocalyptic cow staring me down / capture by MJ Preston.

Taken on September 13, 2013, this shot was captured in a rest area purported to be haunted by the spirit of a murdered aboriginal woman. This presented a spooky combination of northern lights, and the waking of the sun against cloud cover. Location was south of Yellowknife, NWT / capture by MJ Preston. 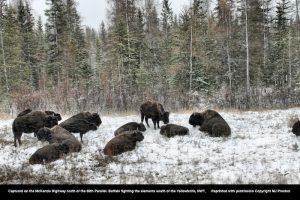 Buffalo fighting the elements south of the Yellowknife, NWT. 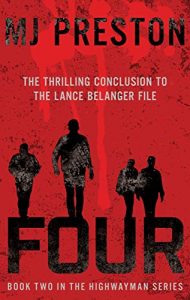 Having abstained from killing for almost a year, the Highwayman is coming unglued.

The predator is now the prey.

But can they stop him before he disappears for good? 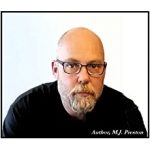 I love interacting with readers and public, so if you contact me via social media I will be happy to add you to my list of friends. Because as readers, you are very important to me. I write stories for readers, and our relationship is paramount. Check me out!

Jocie McKadehttps://www.jociemckade.com/
Her fiction writing has received the Author / Ambassador at Library Journal Self-e Authors, Winner Queen of the West Reader Favorite Award, Amazon Bestseller - Historical, Double finalist in the Next Generation Indie Book Awards in the Mystery and Humorous Categories. Writing humorous cozy mysteries and romantic comedy, Jocie can find humor in most everything, even when she shouldn't. She lives in the Midwest on Dust Bunny Farm with her family.
Previous articleAUTHORS AND THEIR HOBBIES: SHEILA ENGLISH
Next articleHolly’s Book Review: Hollow Kingdom by Kira Jane Buxton