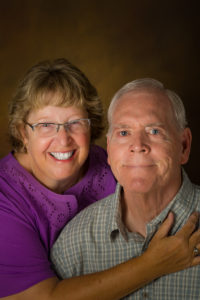 Welcome J.C. Eaton, we’re excited to have you on Reader’s Entertainment. First, tell our readers a bit about yourself.

Hi! We’re Ann I. Goldfarb and James E. Clapp, a married couple who write cozy mysteries under the penname of J.C. Eaton. We’re retired from education and winery tasting room management so we are now enjoying our second career as burgeoning authors.

We’re both from New York State and have lived most of our lives in the Finger Lakes. When we discovered snow was optional, we moved to Arizona.

Ann’s been writing under her own name since the early 2000’s with a number of time travel mysteries for teens. http://www.timetravelmysteries.com She also spent a decade writing for trade magazines. We began to craft cozy mysteries in 2013 when we settled in Sun City West and Jim discovered that there was “way too much fodder” in this retirement community to let it go unnoticed. Needless to say, we used satire and hyperbole to create our quirky characters and pen our Sophie Kimball Mysteries.

We really don’t have a typical day. Sometimes we work mornings but usually afternoons. We try to write every day, even if it’s just 300 – 500 words. Our minds are constantly on the current book we’re writing to the exclusion of everything else. Ann needs absolute quiet when she works from our guest bedroom/office. Jim can write anywhere, even if there’s a marching band in the room. As long as he has a writing tablet in front of him, he’s fine.

Our most productive time of year is in the summer. When the triple digit temperatures hit Arizona, we are stuck in the house from noon to dusk. Ann swims in the morning while Jim exercises, then we both do errands, eat lunch, and settle down in the afternoon to write. She’s at one end of the house, he’s at the other. We meet to share notes and pull things together.

Our latest Sophie Kimball Mystery, Dressed Up 4 Murder, is a hoot, even by our standards. To give readers some background, Sophie (Phee) is a forty something bookkeeper/accountant from Mankato, Minnesota, who gets coerced into solving a book curse in her mother’s retirement community in Arizona. As the series continues, Phee winds up solving more murders and Dressed Up 4 Murder is the latest.

Streetman, the neurotic Chiweenie dog belonging to Phee’s mother Harriet, discovers a dead body under a neighbor’s grill, leaving Harriet and her book club ladies in a state of hysteria until Phee agrees to investigate. The background to this mystery is a series of holiday costume contests where Streetman takes center stage when he’s not snapping, growling, or making advances at the female dogs.

The idea for the book came from looking out at our backyard in the summer. We face two snowbird residences where their large grills are covered up. Needless to say, we always wondered, “What’s really underneath them?”

When we first wrote the story, we thought the idea of a canine costume contest taking place at the dog park was so original. We later found out that they used to have them and that they were judged by Arizona’s well-known sheriff – Joe Arpaio, the sheriff who had inmates wear pink underwear!

We can’t really say we’ve had a difficult character to write. They are all composites of the family members and friends we know. We blend off-beat characteristics and quirks to come up with some of our most memorable folks, like Aunt Ina, who’s in her seventies and is still a hippie, complete with the 1970s attire and then some.

Streetman, Harriet Plunkett’s dog. He’s spoiled rotten and is treated like a prince. We want someone to panfry steak for us, too!

We’ve been influenced by so many talented authors that it would be impossible to cite only a few. Since cozies are our genre of choice, we study the nuances that other authors in the same venue use. No one can beat the descriptions that Nancy Atherton (Aunt Dimity series) uses or the elements of suspense that made Agatha Christie world renown. For us, it continues to be a learning process. We have our own style and humor is the key. Sometimes it’s over-the-top like the exaggerated situations in the Sophie Kimball Mysteries and other times it’s more acerbic as in our Wine Trail Mysteries.

Not sure it’s a talent, but we call Jim “the cat whisperer.” He can get the most ornery cat to settle down and cuddle. Same with fearful cats and feral cats. We have four cats of our own and one Chiweenie, Streetboy, that we used to model Streetman after.

Jim – any kind of pizza

Both of us – Chocolate!!

Thank you so much for joining us today!!! 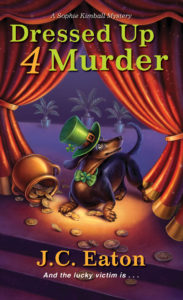 The holiday season has arrived and bookkeeper/amateur sleuth, Sophie “Phee” Kimball, would love nothing more than to enjoy the comforts of her new home with her detective boyfriend near Arizona’s Sun City West. Instead, her mother Harriet wants to showcase her chiweenie-chihuahua-dachshund Streetman in the Precious Pooches Holiday Extravaganza costume events. The festivities begin in October and end on St. Patrick’s Day—with the winner starring in the St. Pat’s Day parade. But things quickly turn an awful shade of green when Streetman uncovers a dead body under a tarp-covered grill in the neighbor’s yard.

The victim is Cameron Tully, a seafood distributor working out of Phoenix, who died from ingesting a toxic sago palm leaf. Before the police can even find a motive and suspect, another Precious Pooch owner nearly dies from the same poison. With Harriet believing someone’s targeting her and Streetman because of the costume contests, Phee will need a potful of Irish luck to sniff out a killer.

READERS CAN PURCHASE DRESSED UP 4 MURDER AT:

TO LEARN MORE ABOUT E.J. EATON AND THEIR BOOKS FOLLOW THESE LINKS:::

Jocie McKadehttps://www.jociemckade.com/
Her fiction writing has received the Author / Ambassador at Library Journal Self-e Authors, Winner Queen of the West Reader Favorite Award, Amazon Bestseller - Historical, Double finalist in the Next Generation Indie Book Awards in the Mystery and Humorous Categories. Writing humorous cozy mysteries and romantic comedy, Jocie can find humor in most everything, even when she shouldn't. She lives in the Midwest on Dust Bunny Farm with her family.
Previous articleA Reason to Be by Norman McCombs Book Trailer
Next articleCarter and Ryder: My Little Brother has Austism! by TM Spivey Book Trailer