QUICK LOOK: AND YOU’D BETTER NOT TELL BY NINA FOXXTen 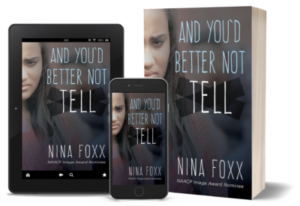 Rumer plans to reinvent herself and be a star while she on a college campus for a summer program. She attracts the attentions of Dante, a graduate teaching assistant and star athlete and is swept off her feet by his flattery and attentions.

She soon finds that that a grown up relationship is more than she bargained for as Dante and his friends take over her life and he pushes her around, both literally and figuratively.

Rumer begins to feel isolated and alone until she finds an unlikely ally in Dante’s almost ex-girlfriend, Ranisha. Will they join forces to stop Dante’s reign of abuse?

Rumer is in for a surprise when she attends a college summer program in And You’d Better Not Tell by Nina Foxx. Rumer and her friend Jenna have been invited to a party by Dante, a teacher assistant who has eyes for Rumer.

Jenna tells her friend not to fall for his charms but Rumer is blinded by her attraction to him. As Dante gets to know Rumer, she continues to ignore the signs Jenna keeps pointing out to her. Rumer must open her eyes before it is too late.

Jenna tries her best among others to get Rumer to pay attention to what’s happening but she won’t listen. Jenna tries one last time and decides to let it all play out and to be there for Rumer when it comes crashing down.

Dante has an agenda and it has Rumer’s name on it. He just needs to get his past affairs to stay away and his friends to back him up. Dante has gotten away with a lot of things and he always gets what he wants. This time he may have picked the wrong target.

This book presents a touché subject that needs to be brought to teenager’s attention, as well as parents. The author does a wonderful job describing the emotions of Rumer, frustration of Jenna and the manipulation of Dante. These are characters that won’t be forgotten. I do want to know what will happen to Dante and I pray this is not the only book this author will write tackling important issues.

Jocie McKadehttps://www.jociemckade.com/
Her fiction writing has received the Author / Ambassador at Library Journal Self-e Authors, Winner Queen of the West Reader Favorite Award, Amazon Bestseller - Historical, Double finalist in the Next Generation Indie Book Awards in the Mystery and Humorous Categories. Writing humorous cozy mysteries and romantic comedy, Jocie can find humor in most everything, even when she shouldn't. She lives in the Midwest on Dust Bunny Farm with her family.
Previous articleSheila’s Book Review: Claiming Mia by Alisa Woods
Next articleSheila’s Book Review: Pirate’s Persuasion by Lisa Kessler