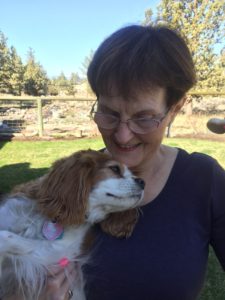 Listening to Caesar
By Jane Kirkpatrick

Our Cavalier King Charles Spaniel we named Caesar, has a royal name. A Blenheim – red and white coloring – he’s the emperor of the household, too.

Caesar and I have this ritual at night after I crawl into bed. He comes up onto my stomach and rests there for a few minutes, getting strokes from me before I either read for a while, talk with my husband or turn out the light. Caesar often falls asleep in that position.

A couple of years ago, in late February which can get cold on the high desert where we live in Oregon, he stopped doing that. He would not get up on my stomach. He’d lay beside me and if I dragged him up on my belly, he wouldn’t look at me nor stay if I let lose his collar. “I guess I’d better go see a GI doc,” I told my husband in jest. “Caesar doesn’t want to hang out on my belly. Maybe there’s something wrong.”

Jerry didn’t take it too seriously (I didn’t either) but a friend of mine had a cat that curled on her chest and when the cat stopped doing it, she scheduled her mammogram and guess what?  Breast cancer. But I didn’t contact a Gastro Intestinal person. What would I say? “My dog thinks there’s something wrong with my gut?”

Two weeks later I was in the ER with both an E.Coli infection and a bowel obstruction. I spent three days in the hospital. My diagnostic dog!

There does seem to be growing evidence that dogs in particular have some intuitive abilities. A Harvard study found certain canines could identify seizures in advance and hypoglycemic episodes for diabetics. They can detect breast cancer from the breath of a person. There’s an intimacy in smelling a person’s breath that dogs and horses apparently are tuned into. And of course, pets are healing presences in our lives too. Brought into places of great tragedy like Stony Hook or during a pandemic, survivors can experience comfort, care, and the warm breath of a safe being.

I read a poem once which now I can’t find but it was about how rescue dogs when they had no one to rescue became despondent and morose. Their fire-fighter handlers decided to dig holes and bury themselves so that the dogs could rescue them. I thought that the most precious gesture of care. The poem ended with a question of what kinds of spaces we can all make to bring life back to help restore not only another’s purpose but to bring joy and happiness to the world.

Our little Cavalier brought great joy when I got home from the hospital. He crawled right up onto me and actually sighed as I stroked his little red and white body. “Next time,” I told him, “I’ll listen to you.”

Jane is the author of 39 books of fiction and non-fiction which have sold over a million copies.  Most are based on the lives of actual historical people. Something Worth Doing is the story of Abigail Scott Duniway, a mother, wife, author, farmer, teacher, newspaper owner/editor and suffragist in the 1800s. She also had a dog. 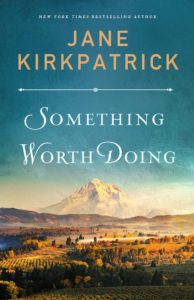 Jane’s latest release is SOMETHING WORTH DOING

Mich.—Award-winning author Jane Kirkpatrick has received rave reviews for her historical novels based upon real-life events. In Something Worth Doing, Kirkpatrick recounts the true story of Abigail Scott Duniway, one of the first women to fight for women’s rights in the mid-1800s. Kirkpatrick’s new novel is a rousing story of courage, family trials, and the cost of pursuing a passion.

When nineteen-year-old Abigail Scott married Ben Duniway in 1853, this strong- willed woman gave up her teaching career and her independence. Although she relished her role as a wife and mother of six, Abigail’s heart was torn between a
call of service and a life dedicated to her family.

Following natural disasters, financial mistakes, and an injury forcing Ben to stop working, Abigail became the primary breadwinner for her growing family. In addition to helping on the farm, she ran a millinery and a private school and wrote twenty-two novels and owned and operated a newspaper. But her most significant role revolved around her campaign for women’s rights. She led the suffrage efforts in the Northwest, promoting equal treatment in law, property rights, education, and the ability for women to vote. She was determined to make a difference and, with her husband’s encouragement, became a significant voice for women in a time when women were seen and not heard.

Something Worth Doing is a family saga swirling with loss, change, disappointment, love, and hope during a time of social change. It is a tender, powerful story of a woman’s conflicts—with society and herself—because she believed that some things are worth doing even when the cost is great.

Jane Kirkpatrick is the New York Times and CBA bestselling and award-winning author of more than thirty books, including One More River to Cross, Everything She Didn’t Say, All Together in One Place, A Light in the Wilderness, The Memory Weaver, This Road We Traveled, and A Sweetness to the Soul, which won the prestigious Wrangler Award from the Western Heritage Center. Her works have won the WILLA Literary Award, the Carol Award for Historical Fiction, and the 2016 Will Rogers Gold Medallion Award. Jane divides her time between Central Oregon and California with her husband, Jerry,
and Cavalier King Charles Spaniel, Caesar. Learn more at www.jkbooks.com.

Jocie McKadehttps://www.jociemckade.com/
Her fiction writing has received the Author / Ambassador at Library Journal Self-e Authors, Winner Queen of the West Reader Favorite Award, Amazon Bestseller - Historical, Double finalist in the Next Generation Indie Book Awards in the Mystery and Humorous Categories. Writing humorous cozy mysteries and romantic comedy, Jocie can find humor in most everything, even when she shouldn't. She lives in the Midwest on Dust Bunny Farm with her family.
Previous articleIndependent Bookstore of the Week – The Ripped Bodice
Next articleAUTHORS AND THEIR AMAZING PETS — JANE KIRKPATRICK 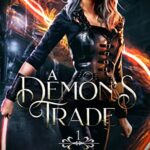 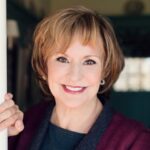 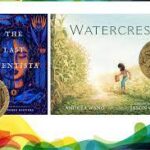