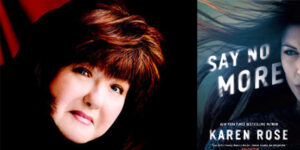 Authors Uncovered presents Karen Rose, author of SAY NO MORE (Berkley) at a virtual event via Crowdcast on Tuesday, August 18 at 8:00 pm (ET).

Mercy Callahan thought she’d escaped the cult decades ago, but its long fingers are reaching out for her again in this electrifying novel in Rose’s Sacramento series. Seventeen years ago. That was the last time Mercy Callahan saw Ephraim Burton, the leader of the twisted Eden cult where she was raised. But even though she escaped the abuse and terror, they continue to haunt her. Ephraim, who had thought Mercy long dead, discovers she is in fact alive and that she is digging around for the cult’s secrets. And now he’ll do anything to take her back to Eden–dead or alive.

Karen Rose is the award-winning, #1 international bestselling author of some twenty novels, including the bestselling Baltimore and Cincinnati series. She has been translated into twenty-three languages and her books have placed on the New York Times, the Sunday Times (UK), and Germany’s der Spiegel bestseller lists.

Jocie McKadehttps://www.jociemckade.com/
Her fiction writing has received the Author / Ambassador at Library Journal Self-e Authors, Winner Queen of the West Reader Favorite Award, Amazon Bestseller - Historical, Double finalist in the Next Generation Indie Book Awards in the Mystery and Humorous Categories. Writing humorous cozy mysteries and romantic comedy, Jocie can find humor in most everything, even when she shouldn't. She lives in the Midwest on Dust Bunny Farm with her family.
Previous articleReader’s Entertainment Radio Presents: Amanda Jayde
Next articleSheila’s Book Review: The One Meal A Day Diet

One World presents a new Ideas & Action podcast that explores different challenges and opportunities facing our society, sharing perspectives and advice from their authors to understand...
Read more