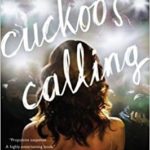 THE CUCKOOS CALLING BY ROBERT GALBRAITH

This is the first book of the Cormoran Strike series. It is not quite as magical as other books by this author, but, it sure is good fun. ?

Cormoran Strike runs a very small private detective agency (one client, one full time employee…himself) and had just left his long time girlfriend, Charlotte. He has, just last night, set up his office as his home and office. Strike is an ex-military investigator who was badly injured in Afghanistan (leaving one-half of one leg needing a prosthetic). He is very detailed oriented, but, not the greatest business man. His rent is overdue, and his temporary secretary just left.

His life, at the moment, sucks.

Robin Ellacott is a young college dropout (Psychology) headed for a temporary secretarial position at a small private detective agency. Her longtime boyfriend, Matthew, proposed to her last night, and Robin is walking in the clouds.

She is the happiest she has ever been.

As she approaches the door of the detective agency…..a dark haired woman flies out of the door followed by a huge hairy man who knocks into Robin sending her flying over the edge to her……

Oh, wait, that huge man grabbed her just in time to save the life he almost ended.

A few minutes later, John Bristow walks into the office. He is a lawyer and Lula Landry’s brother. And he wants to hire Strike to investigate her death as he thinks it was…..murder.

To see what happens, you will have to read the book. ?

“The Cuckoo’s Calling” is a fun, fast, interesting read by one of the most famous authors in the world today. In it’s own way, it is magical. ? It is the first book in the Cormoran Strike Series.

Jocie McKadehttps://www.jociemckade.com/
Her fiction writing has received the Author / Ambassador at Library Journal Self-e Authors, Winner Queen of the West Reader Favorite Award, Amazon Bestseller - Historical, Double finalist in the Next Generation Indie Book Awards in the Mystery and Humorous Categories. Writing humorous cozy mysteries and romantic comedy, Jocie can find humor in most everything, even when she shouldn't. She lives in the Midwest on Dust Bunny Farm with her family.
Previous articleSheila’s Book Review: My Dog’s Health and Wellness Records
Next articleIndependent Bookstore Spotlight of the Week – The Strand, New York, New York