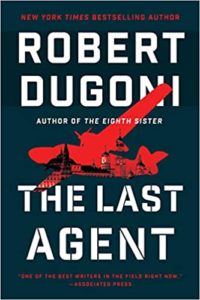 An American operative in Russia is on the run for his life in a thriller of heart-stopping betrayal and international intrigue by the New York Times bestselling author of The Eighth Sister.

Betrayed by his own country and tried for treason, former spy Charles Jenkins survived an undercover Russian operation gone wrong. Exonerated, bitter, and safe, the retired family man is through with duplicitous spy games. Then he learns of a woman isolated in Moscow’s notorious Lefortovo Prison.

If it’s Paulina Ponomayova, the agent who sacrificed her life to save his, Jenkins can’t leave her behind. But there’s no guarantee it’s her. Or proof Paulina is still alive. To find out, Jenkins must return to Russia. Next move: blackmail Viktor Federov, a former Russian officer with his own ax to grind, into helping him infiltrate Lefortovo. The enemy who once pursued Jenkins across three continents is now the only man Jenkins can trust.

Every step of the way—from Moscow to Scandinavia to the open ocean—they’re hunted by a brutal Russian agent on a killer quest of his own. Out of loyalty to Paulina—dead or alive—Jenkins is putting everyone’s life on the line for a new mission that could be his last.

YOU CAN PURCHASE THE LAST AGENT AT:

Robert Dugoni is the critically acclaimed New York Times, Wall Street Journal, Washington Post and #1 Amazon bestselling author of the Tracy Crosswhite police series set in Seattle, which has sold more than 6 million books worldwide. He is also the author of The Charles Jenkins espionage series, and the David Sloane legal thriller series. He is also the author of several stand-alone novels including The 7th Canon, Damage Control, and the literary novel, The Extraordinary Life of Sam Hell – Suspense Magazine’s 2018 Book of the Year, for which Dugoni’s narration won an AudioFile Earphones Award; as well as the nonfiction exposé The Cyanide Canary, a Washington Post Best Book of the Year. Several of his novels have been optioned for movies and television series.

Dugoni is the recipient of the Nancy Pearl Award for Fiction and a two-time winner of the Friends of Mystery Spotted Owl Award for best novel set in the Pacific Northwest. He is also a two- time finalist for the International Thriller Award, the Harper Lee Prize for Legal Fiction, the Silver Falchion Award for mystery, and the Mystery Writers of America Edgar Award.

Jocie McKadehttps://www.jociemckade.com/
Her fiction writing has received the Author / Ambassador at Library Journal Self-e Authors, Winner Queen of the West Reader Favorite Award, Amazon Bestseller - Historical, Double finalist in the Next Generation Indie Book Awards in the Mystery and Humorous Categories. Writing humorous cozy mysteries and romantic comedy, Jocie can find humor in most everything, even when she shouldn't. She lives in the Midwest on Dust Bunny Farm with her family.
Previous articleBook Lights radio with Lisa Kessler presents Author Melissa Blue
Next articleSheila’s Book Review: Fit & Fabulous