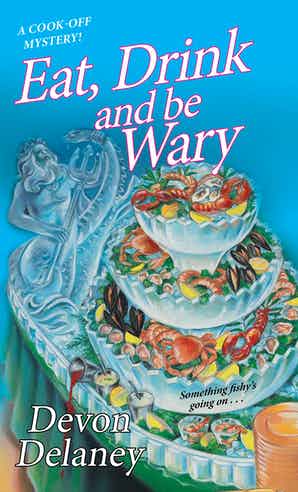 Eat, Drink and Be Wary — A Cook-Off Mystery #4 by Devon Delaney

The New England Fall Food Fest has begun, and for competitive cook Sherry Oliveri, it’s a chance to take home a prize—and take down a killer . . .

Sherry’s hoping her Savory Shrimp Lettuce Cups will impress the judges, and she’s invited her brother, Pep, to serve as her sous-chef. The good news is that she takes first place in her category, the bad news is that it’s easier to win when your toughest competition is dead . . .

After contestant Fitz Frye is found with a fishhook in his neck, Pep’s strange behavior doesn’t help his case when the police consider him top suspect. While Pep sits through a shakedown, Sherry searches near and far for the real culprit—before another deadly course is served . . .

YOU CAN PURCHASE EAT, DRINK AND BE WARY at:
Multiple retailers 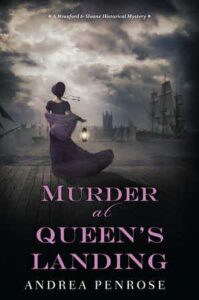 A bright new star in British Mystery that fans of Jacqueline Winspear, Rhys Bowen, and Amanda Quick will love, Andrea Penrose transports readers to Regency England with the story of Lady Charlotte Sloane and the Earl of Wrexford who must untangle a dangerous web of secrets and lies that will call into question how much they really know about the people they hold dear—and about each other…

When Lady Cordelia, a brilliant mathematician, and her brother, Lord Woodbridge, disappear from London, rumors swirl concerning fraudulent bank loans and a secret consortium engaged in an illicit—and highly profitable—trading scheme that threatens the entire British economy. The incriminating evidence mounts, but for Charlotte and Wrexford, it’s a question of loyalty and friendship. And so they begin a new investigation to clear the siblings’ names, uncover their whereabouts, and unravel the truth behind the whispers.

As they delve into the murky world of banking and international arbitrage, Charlotte and Wrexford also struggle to navigate their increasingly complex feelings for each other. But the clock is ticking—a cunning mastermind has emerged . . . along with some unexpected allies—and Charlotte and Wrexford must race to prevent disasters both economic and personal as they are forced into a dangerous match of wits in an attempt to beat the enemy at his own game.

YOU CAN PURCHASE MURDER AT QUEEN’S LANDING AT:
Multiple Retailers 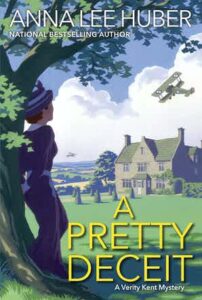 In the aftermath of the Great War, the line between friend and foe may be hard to discern, even for indomitable former Secret Service agent Verity Kent, in award-winning author Anna Lee Huber’s thrilling mystery series.

Peacetime has brought little respite for Verity Kent. Intrigue still abounds, even within her own family. As a favor to her father, Verity agrees to visit his sister in Wiltshire. Her once prosperous aunt has fallen on difficult times and is considering selling their estate. But there are strange goings-on at the manor, including missing servants, possible heirloom forgeries, and suspicious rumors—all leading to the discovery of a dead body on the grounds.

While Verity and her husband, Sidney, investigate this new mystery, they are also on the trail of an old adversary—the shadowy and lethal Lord Ardmore. At every turn, the suspected traitor seems to be one step ahead of them. And even when their dear friend Max, the Earl of Ryde, stumbles upon a code hidden among his late father’s effects that may reveal the truth about Ardmore, Verity wonders if they are really the hunters—or the hunted . . .

YOU CAN PURCHASE A PRETTY DECEIT AT:
MULTIPLE RETAILERS