Welcome Jessica, we’re excited to have you on Reader’s Entertainment. First, tell our readers a bit about yourself.

I live in northern New England. In the summers I live on the coast of Maine and I spend the rest of the year in rural New Hampshire. I am delighted to write full-time from both locations.

My first novel was published in 2010 and I was writing for several years before it was released so I would guess around 13 years in a serious way. Like most authors I also wrote regularly throughout childhood.

I start most days by walking my dog, Sam. Upon returning home I make coffee before heading to my office for my morning routine of reading non-fiction, journaling and looking over my plans for the day. I get busy with my work-in-progress at about 10 am and tend to work until 12:30 or so. Depending on where in the process I am I either research, plot, write or revise. I break for lunch and then spend the afternoons on the admin side of the writing business like my correspondence, blog posts etc…

My upcoming novel, Murder Comes to Call, was inspired by research. I discovered that the UK Census in 1921 had to be delayed by a couple of months due to civil unrest. I was intrigued by all that could mean and the story grew from there.

If you could be one of your characters for a day who would it be and why?

I would love to be Beryl for just one day. Any more than that might be exhausting! She is so untroubled by the opinions of others and is so bold and adventurous in ways that I sometimes find more challenging!

I absolutely love books by P.G. Wodehouse and E.F. Benson. I think both authors influenced my interest in the interwar period. They both encouraged me to enjoy the lighter, fun moments in a story and also how rich a book set in the intimacy of a rural village can be.

Since I generally refuse to check luggage, I can pack really, really lightly. I went on a nine day trip to China a few years ago with only a small duffle bag and half of that was filled with knitting and granola bars.

Coffee in the morning, tea in the afternoon and wine or champagne in the evening. If things are really off the rails, I might substitute a dry gin martini for the champagne!

Thank you so much for joining us today, Jessica!

Make sure you check out Jessica’s latest release MURDER COMES TO CALL: 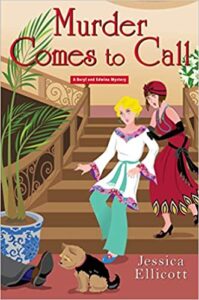 The lean years following World War I can lead to desperate acts—even in the quiet English village of Walmsley Parva. When a series of burglaries seems to culminate in murder, brash American Beryl Helliwell and proper Brit Edwina Davenport are eager to solve the case . . .

World-renowned adventuress Beryl Helliwell cited for “reckless” motoring? Why, the very idea! Constable Gibbs just has it in for her. The solution? Charm the magistrate, of course. But days after Beryl’s appearance before the bench, she and Edwina pay a visit to the magistrate only to find his home ransacked and the man himself lying dead at the bottom of a grand staircase.

Given the state of the house, his death appears to be connected to a rash of robberies in the village. Declan O’Shea, the handsome helper Beryl hired to assist their aged gardener Simpkins, falls under suspicion after having had his own run-in with the magistrate—but mostly, Beryl believes, because he’s Irish.

While unofficially looking into the magistrate’s murder, the ladies are hired in their official capacity as private inquiry agents to find census reports that have gone missing. Is someone trying to hide something from the census takers—and could that theft have anything to do with the magistrate’s death? Beryl and Edwina are once again in fine form as they engage in a little reckless sleuthing to bring these assorted mysteries to a speedy conclusion. . . .

You can purchase MURDER COMES TO CALL at:

About the Author:
Jessica Ellicott is the author of Murder in an English Village, the first book in the Beryl & Edwina Mystery series. She loves fountain pens, Mini Coopers, and throwing parties. She lives in northern New England where she obsessively knits wool socks and enthusiastically speaks Portuguese with a shocking disregard for the rules of grammar.

Find out more about Jessica at: