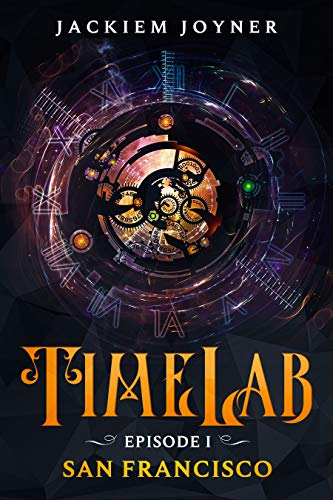 TIMELAB: EPISODE ONE SAN FRANCISCO
A sci-fi adventure in a new direction by acclaimed musician and saxophonist Jackiem Joyner

Two Scientists. One from long ago. The other from modern day 2018.
Both on the precipice of greatness.
Both met with disdain, and in one case, branded a witch.

Sir Bernard, a seasoned and trusted scientist, living in the time of King Caesar, is lauded by many… until his invention sparks rage and fear among the people. When they brand him as a witch, practicing dark magic, he makes a daring escape via his time machine.
He finds himself in San Francisco, 2000 years in the future. There, he befriends Kyle, a young, talented physics student, whose brilliance also sparks distrust, and in some cases, maltreatment.

Together, the two scientists are a formidable force, but there are barriers that prevent them from making good use of their scientific theories.
Sir Bernard’s homeland is on the brink of war. To save his people, he must go back in time, but first he’ll need a new, more powerful time machine.
Kyle has struggles of his own. His brain puts him ahead of the class, but he has trepidation about his mother’s legacy. He wants to clear her name and prove that she didn’t intentionally detonate a scientific lab, killing everyone, including herself.

Two scientists from vastly different worlds fight to erase the past. Can they prove their theories are real and can they save lives and reputations, including their own?

After more than 12 years as a recording artist, Jackiem continues to stand out with electrifying live performances and brilliant music productions. As a performer, he has toured over 30 countries and performed with the likes of the late George Duke, Marcus Miller, Keiko Matsui, Donnie McClurkin, Angela Bofill, Najee, Kirk Whalum, Peter White, and many, many more. Joyner’s radio success is widely known within the industry.

Joyner has two number 1 hit songs, five top 10 billboard singles, and a number one debut album under his belt. In addition, he published the highly acclaimed science fiction novel Zarya, which received high praise and a five star rating on Amazon. Timelab Episode One: San Francisco is Jackiem’s second novel.