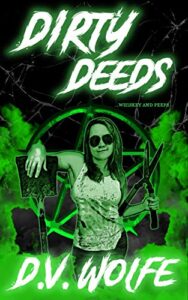 If only I could give it more than 5 stars! LOL

About the Book: After St. Louis, I knew it was time to seat the cannibal tribe in the “past tense” section of living. I mean, you just don’t kidnap someone’s demon accountant. That’s just frickin’ rude.

Of course, now we’re doing the chasing, like a couple of shotgun-toting girls hunting down our dates to the Sadie Hawkins’ dance. Well….except that Noah’s not a girl…and our dates are a cannibal tribe and yet another dickbag demon that wants to kill me. Oh, and the dance is death. Possibly of the eaten-alive, cannibal variety. At least if the cannibals get me first. If it’s the demon, there’s a good chance it will involve a reenactment of the scene from that Indiana Jones movie when the guy rips the poor sap’s heart right out of his chest.

Then there’s the constant acid reflux of having Noah along for the ride. Apparently my handcart, hurtling towards Hell seats two. I’ll do my best to keep him alive as we hunt Necrowitches, Pucas, bugbears, demons, and of course, Sister Smile and her tribe of cannibals.

Raise the whiskey and pass the ammunition.

How have I not heard of this series before?!!!
So this is kind of like Armies of Darkness/Ash vs Evil Dead meets Constantine. It’s so original with the cannibals and demons and witches wrapped with sarcasm and humor!
I ate this up (yeah…that’s a pun since there are cannibals in the book) in a day! I will certainly read more in this series!

NEVER SAY 'S'EVER IN DEADWOOD BY ANN CHARLES All Violet Parker wants is a day off. Better yet, just a “normal” day. But things never go as...
Read more
Blog

Special Feature -- Celebrating Father's Day with Authors! WHAT MY FATHER TAUGHT ME BY JENNIFER ANNE GORDON This question, it’s a loaded one. One the surface...
Read more
Guest Bloggers

Special Feature --- Celebrating Fathers What My Father Taught Me By V.S. Holmes It would be easy to say my father taught me everything. It’d almost...
Read more
- Advertisment -

SCHOLASTIC TEAMS UP WITH 5 FEMALE LEADERS TO DEBUT NEW “RISING...