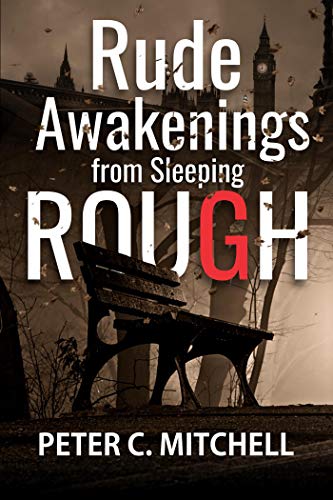 RUDE AWAKENINGS FROM SLEEPING ROUGH
A new non-fiction book by Peter C. Mitchell with his experiences on Life in the streets!

This is a story that the charities don&#39;t want you to read. This is the fate that can befall any of us that you don’t want to acknowledge.

For years you have passed them on the streets, as much a partv of your routine as your morning shower, your half-hearted scan of the world’s news — fake or otherwise — and the barista who artistically crafts the £4 cappuccino with soya milk, three drops of vanilla, and a flutter of chocolate sprinkles that has to be made just right or it throws your day off in ways that nobody else understands.

You see them as often as you see your own family. The disenfranchised. The rough sleepers. The homeless. Camped out and befouling the sidewalks and alleyways of your daily commute, their worldly possessions, such as they are, spread around them —as dirty and worn out as the sleepers themselves, but as valuable to them as your £100 brogues are to you.

Occasionally you get the urge to throw some loose change at them as a gesture of magnanimous humanity, but when push comes to shove you would rather tip the honest, hard-working barista who ensures your day gets off to a proper start. Better to support the successful rather than throw good money after bad trying to keep the great unwashed afloat.

You have conditioned yourself to look through them – allowing your eyes to pass over them without actually seeing them. A defeated acceptance of lives gone wrong; uncomfortable reminders of what can happen when the best laid plans of mice and men go horribly awry. “Thank god I’m not like them”; you think, sipping your £4 cup of liquid gold; I could never let that happen to me.

Until suddenly – inexplicably – it does. And you discover the life you have built was nothing more than a house of cards that crashed down around you with frightening ease. A spate of bad luck, a poor decision or two, and the ubiquitous; circumstances beyond your control; conspire to create a perfect storm of events that leaves you cast away on the streets feeling dazed, disjointed, and damned.

This is Peter C. Mitchell’s story. But it could be your story. Not to mention the thousands of others, past and present, that have found themselves broken behind closed charity doors. Theirs are the stories that need to be heard. To be read.

This is Peter C. Mitchell’s story. But it could be your story. Not to mention the thousands of others, past and present, that have found themselves broken behind closed charity doors. Theirs are the stories that need to be heard. To be read.

London born, Canadian raised Peter Mitchell was bumbling his way through a moderately successful career in business journalism when an investigation into a story on Corporate Social Responsibility inspired him to look beyond profit margins and PR into the very real problems faced by society. This inspiration prompted him to dip his toes into a self-confessed Sanity/Vanity project of a biography of his great, great grandfather, Sir John Kirk.

As Secretary of The Ragged School Union, John championed the causes of children, the disabled, and the working poor in Victorian-era London. His influence extended beyond the city limits, and his life proved more interesting than previous biographies revealed. Dust-buried references have surfaced in the most obscure locales, showing the consequences—both good and bad—to the ragged and crippled children John Kirk devoted his life to help.

In 2017, Peter returned to London to complete his research and begin the writing of “A Knight in the Slums.” The past was ready to be mined, and the future was assured. The present, however, took an unpredictable -and darkly ironic—turn.

A series of unfortunate events transpired, creating a perfect storm of calamities leaving Peter penniless and sleeping rough. He had unwittingly fallen victim to the same societal ailments John Kirk fought. That nightmare inadvertently provided him with an inside look into the current workings of these same systems put in place by his great, great grandfather, and others like him, put in place over a century ago. That experience frightened him more than the horrors of homelessness itself.

Armed with the scars of this unexpected, but disturbingly relevant, knowledge Peter continues to work on “A Knight in the Slums” with renewed insight. John Kirk created solutions over 100 years ago that are still in play today. Times have changed; yet the solutions have stagnated, and proven to not be solutions, but mechanisms that perpetuate the cycle of poverty: a Hell’s Carousel funded by well-meant individuals and institutions blinded by the brand of “charity.” New systems need to be developed; new solutions need to be found.

Mark Leslie Lefebvre has been writing since he was thirteen years old and discovered his mother’s Underwood typewriter collecting dust in a closet. He started submitting his work for publication at the age of fifteen and had his first story published in 1992, the same year he graduated from university.

Under the name Mark Leslie, he has published more than a dozen full length books. He pens a series of non-fiction paranormal explorations for Dundurn, Canada’s largest independent publisher. He also writes fiction (typically thrillers and horror) and edits fiction anthologies, most recently as a regular editor for the WMG Publishing Fiction River anthology series.

The very same year, Mark saw his first short story in print he started working in the book industry as a part-time bookseller, and was bitten by the book-selling bug. He has worked in virtually every type of bookstore (independent, chain, large-format, online, academic and digital). He has thrived on innovation, particularly related to digital publishing, and enjoys interacting with the various people who make the book industry so dynamic.

Between 2011 and 2017, Mark worked at the Director of Self-Publishing and Author Relations for Kobo where he was the driving force behind the creation of Kobo Writing Life, a free and easy to use author/small-publisher friendly platform designed to publish directly to Kobo’s global catalog in 190 countries. By the end of 2016, Kobo Writing Life established itself as the #1 single source of weekly global unit sales for Kobo and, in primarily English language territories, responsible for 1 in every 4 eBooks sold.

Mark has spoken professionally in the United States and Canada, in the UK and across Europe, specializing in advances in digital publishing and the vast and incredible opportunities that exist for writers and publishers.

Stark Publishing is an imprint Mark created in 2004 when he released his first book One Hand Screaming. He has used the imprint to publish more than 25 books. Campus Chills (2009) and Obsessions (2020) are two of the titles he used to anthologize other authors writing. Rude Awakenings from Sleeping Rough is the first single author title from a different author that he has published.