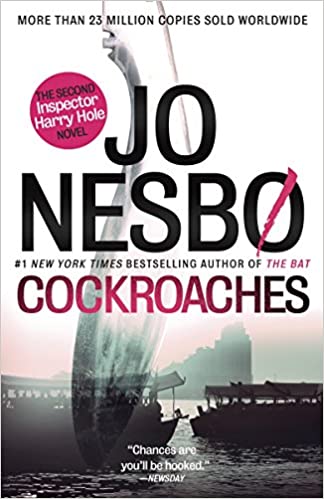 Norwegian Detective Harry Hole has been drinking steadily since his success in Australia (see my review of “The Bat”).

The Norwegian Ambassador to Thailand,  has been found, by the hooker he hired, murdered in a Bangkok motel room.  A knife stuck in his back.

The Norwegian authorities know more than they will discuss and need the investigation into the Ambassador’s murder to be kept under wraps.  They decide the best person to send to Bangkok is Harry since he is somewhat famous now, but, also, they think, a controllable alcoholic.

Going sober for Harry is no easy task and by the time he reaches Bangkok, he is in the midst of withdrawal.  But he joins a team of investigators led by American ex-pat, homicide inspector, Liz Crumley.

Visiting the scene of the crime, Harry starts his investigation by examining the body (kept cold with the AC on high) and the crime scene, including the Ambassador’s limo.

The murder count rises and the intrigue increases….reaching the highest levels in the Thailand Norwegian community.

“Cockroaches” is the second book in the Harry Hole (pronounced Holy) series, and is terrific, dark, brutal, and hot. Harry Hole is a great detective but is fighting his own demons that he desperately tries to keep at bay with drugs and alcohol….except when he is on a case.