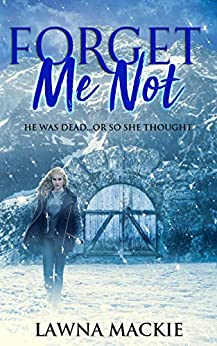 FORGET ME NOT by Lawna Mackie

He was dead…or so she thought.

At the age of twelve, Pippin Bartlett, is abducted by her mentally ill father who goes on a killing rampage. Fortunately she is rescued outside the small town of Snow Lake, Manitoba by ex-sniper and CSIS Agent Matt Lalor, who shoots and reportedly kills the man although the body is never recovered.

Fast-forward ten years and we find Pippin writing successful novels in New York under the alias of Avery Woods. Her words help lessen the impact of the terror she lived through. That is until a series of fan letters arrive. And not just from any fan, but one who sounds a lot like her father and is determined to finish the failed job from ten years ago.

Matt Lalor has secrets of his own. A career that ended badly and one he wishes to forget. He lives his life in a remote cabin in Snow Lake where, whenever possible, he avoids people. With two notable exceptions he mostly succeeds. The first is the day he is required to rescue a twelve-year old girl. Never missing a shot he believes whole-heartedly the man is dead. The second is the day twenty-two year old Pippin drives into a snowbank on his property to turn his world upside down. She’s being hunted by a killer for a second time, and Matt refuses to let harm come to her. What he doesn’t expect is for the fearless and sassy beautiful young woman to capture his heart in the process.

The scope allowed him to see perfectly through the dark night sky. His target held a knife in his outstretched hand. He had a perfect shot.

“Shit!” He and Monty inched forward.

“Stay away from me!” the girl screamed. “I swear I’ll jump.”

The hideous laugh made his blood curdle and the hairs stand on the back of his neck.

“You’re too scared to jump. You won’t do it,” Baxter jeered.

It was now or never.

“She might not jump, but I have no problem pulling my trigger,” Matt yelled, never taking him out of his sights.

Startled, James Baxter turned in the direction of his voice, then let out a string of vulgar words.”

“Fuck! It doesn’t matter. She’ll be dead anyway. I told that stupid bitch Clarice. If I can’t have her nobody will. Shut the hell up James! I can’t think!” Still holding the knife, he clutched his head.

“Back up slowly Baxter. It doesn’t need to end this way.”

“Pippin, my name is Matt. Are you hurt?” he shouted out to her.

She lifted her head towards the direction of his voice. “No. Well, yes, a little.”

“Shut up Pippin,” Chance shouted at her. “Don’t you fucking talk to him.” He moved up the log again and Pippin screamed, clinging to the top of the tree.

Matt heard the crack and groan from the taxed wood. It was never simple.

“Baxter, you’ve got one last chance. Back up now!”

Slowly and quietly he calmed himself and took a few deep breaths. He closed his eyes and visualized his target. Opening his eyes he stared into the scope and the cross hairs aligned to the man’s head. Normally he’d shoot for the chest, but he was lying on his stomach.

Baxter jumped and Matt pulled the trigger. The bullet found its mark.

The tree cracked again because Baxter’s body rolled off the side and hung swinging in the air caught up in a large limb.

He swung the gun over his shoulder and ran for the base of the tree, but it was too late. The large root was unable to take the weight of Baxter’s body swinging in the air. He heard the cracks as it lost its hold to the earth.

Before he could reach the tree it tore from the ground and fell through the air along with Pippin’s scream.

“Fuck!” Matt screamed, watching everything cascade downward and plunge into the water.

If she managed to survive the fall she’d drown for sure.

Monty whined and barked as he stared over the edge. Matt knew Monty was the best chance the girl had. The dog would make it faster down the hill than he could.

What he hadn’t expected was what the crazy dog did next. Instead of tearing off down the hill, he took off at a run and leapt off the cliff. 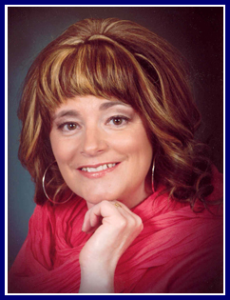 I’m a small town girl with big world dreams. I was born in Jasper, Alberta, and my parents were outdoor enthusiasts. My dad was an avid fisherman and I’m certain my mom was Mother Nature.

The love of my life is my husband. He, along with my animals are my inspiration for everything I write.
I live for romance, and absolutely believe true love conquers all. From an early age you could always find me with my nose buried in a romance novel—that hasn’t
changed. I write various forms of romance from contemporary, paranormal and fantasy to erotica.

Find out more about Lawna and her books at:::