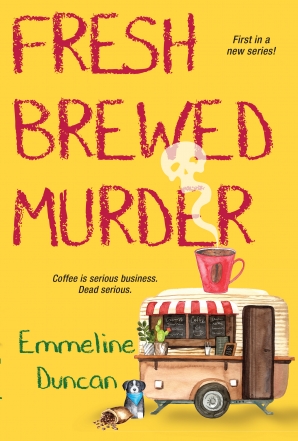 Master barista Sage Caplin is opening a new coffee cart in Portland, Oregon, but a killer is brewing up a world of trouble…

Portland is famous for its rain, hipsters, craft beers…and coffee. Sage Caplin has high hopes for her coffee truck, Ground Rules, which she runs with her business partner, Harley–a genius at roasting beans and devising new blends. That’s essential in a city where locals have intensely strong opinions about cappuccino versus macchiato–especially in the case of one of Sage’s very first customers…

Sage finds the man’s body in front of her truck, a fatal slash across his neck. There’s been plenty of anger in the air, from long-time vendors annoyed at Ground Rules taking a coveted spot in the food truck lot, to protestors demonstrating against a new high-rise. But who was mad enough to commit murder? Sage is already fending off trouble in the form of her estranged, con-artist mother, who’s trying to trickle back into her life. But when Sage’s very own box cutter is discovered to be the murder weapon, she needs to focus on finding the killer fast–before her business, and her life, come to a bitter end… 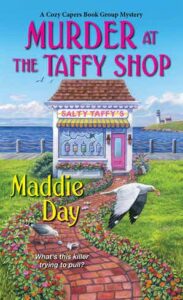 When your mother is an astrologist and your dad is a minister, you learn to keep an open mind. Which is just what Mac loves to do–exercise her mind by puzzling out fictional clues in the mystery novels she reads and discusses with her Cozy Capers Book Group.

But now Mac’s friend Gin has found herself in a sticky situation. After wealthy genealogist Beverly Ruchart is found dead outside Gin’s taffy shop, the candy maker becomes a person of interest. When it’s revealed that Beverly was poisoned the night Gin brought a box of taffy to a dinner party at Beverly’s house, she’s bumped to the top of the suspects list. It’s up to Mac and her Cozy Capers crime solvers to unwrap this real-life mystery. But this time they might have bitten off more than they can chew… 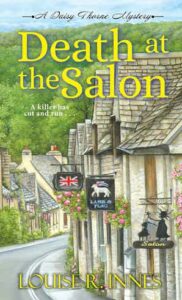 Death at the Salon — A Daisy Thorne Mystery
By Louise R. Innes

In the second installment of the new Daisy Thorne Mystery series by Louise R. Innes, after Daisy, a hairdresser and owner of Ooh La La Beauty Salon, finds her missing scissors in a customer’s back, she becomes the prime suspect in a murder…

When Ooh La La regular Mel Haverstock left the hair salon that morning, no one expected it would be her final parting. But when Daisy closes shop Saturday night, she finds her client dead as the mullet cut. Homicide is back in style in the quiet village of Edgemead in Surrey, England. But who would want to harm a hair on poor Mel’s head?

Suspicions higher than a beehive pile on Daisy when it’s revealed that she and Mel had tangled back in high school, and DNA evidence seems to color her guilty. Handsome DCI Paul McGuinness gives the hairstylist new accessories–a lovely pair of silver handcuffs. To clear her name, Daisy must highlight the real backstabber, or she’ll end up shaving heads in the prison barbershop. 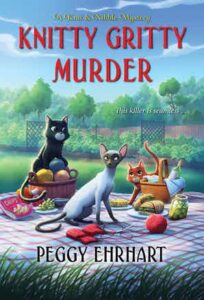 Pamela Paterson and the Knit and Nibble ladies have plenty of talents that don’t revolve around yarn. But their penchant for patterns has led to a dangerous hobby they just can’t quit–unraveling murders.

Most times of the year, the tight-knit community gardens in quaint Arborville, New Jersey, overflow with seasonal vegetables and herbs. But who planted the dead body? Farm-to-table enthusiast Jenny Miller had a cookbook in the works when she was suddenly found strangled by a circular knitting needle in her own plot. Now, the pressure is on Pamela and her neighbor Bettina as they weave together clues in search of the person who kept Jenny’s renowned heirloom plants–and budding career–from growing. With suspects and victims cropping up like weeds, it’ll take a whole lot more than green thumbs and creative minds this spring to entangle the crafty culprit…