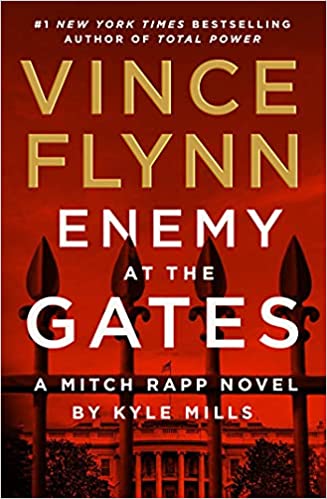 Book Review: “Enemy at the Gates” by Vince Flynn and Kyle Mills
by Mike Pihlman

Six months after the events of the last book, there has been a presidential election, the world (meaning us, the reader) knows about a thing called a “coronavirus”, and Mitch Rapp is wondering what his life will be like moving forward….as a 50-something year old operative / assassin, with a family.

In fact, Claudia and Anna have moved to South Africa and are setting the family up in a new home there (Claudia is working remotely), and Mitch is preparing to get back into cycling. As such he is on a diet and he is planning to visit them soon.

In the meantime, Irene Kennedy distrusts the new president, Anthony Cook. She considers him ruthless…..someone who promised the people who elected him that he was a political outsider who will change the way things work in politics, and make the country whole again after the total power outage killed thousands and nearly ruined the economy. Cook’s wife, the new first lady, Catherine, is everything Cook is….times two.

In another part of the world……in a world class research facility funded by the worlds first trillionaire, Nicolas Ward, Dr. David Chism is on the verge of a discovery that will change the world, and Nicolas Ward is funding many projects that will also change the world for the better. For the majority of the people in the world….but, not for some…..and they want them both…..DEAD.

After an attack on the Ugandan research facility by terrorist Gideon Auma……Dr. Chism and his two colleagues barely survive and are lucky to be safely hidden in a cave in the mountains….for now.

Irene wants to send Mitch Rapp to find them, but, the Cooks have other plans……

All HELL breaks loose, and…….

“Enemy at the Gates” is a scary look at how power and money can be used for both good and evil. It is a scarily headline-realistic, super fast, heart-thumping, read with an explosive ending that will leave Mitch Rapp fans reeling with disbelief and sadness.