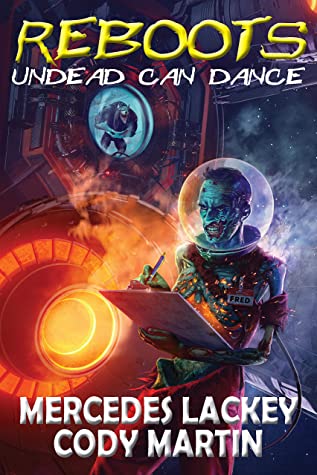 An oddball crew of paranormal creatures face their own strange issues and the threats of space as they travel together in this space opera paranormal sci-fi read, “Reboots: Undead Can Dance” by Mercedes Lackey & Cody Martin.

Say hello to Humph the Boggart, the principled, down-on-his-luck private detective, Skinny Jim the zombie, and Fred the werewolf, in this film noir-style space opera.

This was brilliant, humorous, and the vastly expansive world the authors have crafted. The characters were so unique and captivating to read, as their own unique backstories and connection to the paranormal world made their interactions and developing relationships with one another feel vibrant and captivating.

What truly captured my attention though was the world-building and mythos that the authors developed in the narrative. Early on in the story, the authors begin to delve into this vast universe of paranormal uniqueness, from corporations run by the humans or the “Norms”, to the way the characters allude to a zombie war years before that left zombies forced to hide if they gained intelligence, to the increased power a werewolf gains if exposed to more than one moon.

Each story and chapter only served to ignite more and more world-building, which also greatly impacted the growing narrative surrounding this truly oddball detective agency that turned the plot into a full-blown noir thriller. The genre-melding that happened in this story was truly mind-blowing, and yet kept me so enraptured with the narrative that I was on the edge of my seat the entire time.

A memorable, fun, and exhilarating paranormal sci-fi thriller, authors Mercedes Lackey and Cody Martin’s “Reboots: Undead Can Dance” is a must-read book this fall and winter. The humor and wit that the characters showed balanced out the greater mythos of the paranormal world and the space exploration that they delved into, making this a truly exciting book that I can’t wait to dive back into again. If you haven’t yet, be sure to grab your copy on November 30th, 2021!