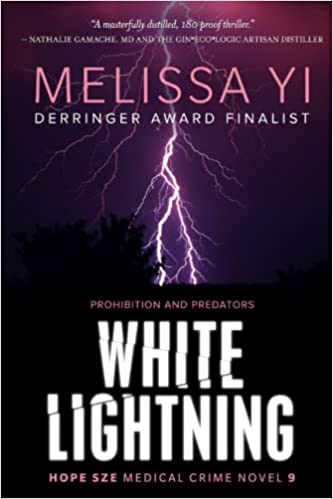 Dr. Hope Sze expected a romantic weekend away at the Rumrunner’s Rest, a Windsor inn once famous for serving the best alcohol and shore dinners during Prohibition. Instead, she finds a set of human bones in the fireplace.

As Hope dives into the inn’s history, she discovers the legend of White Lightning, a handsome pilot who would fly liquor across the river to the Purple Gang in Detroit, and to Al Capone in Chicago.

Over the decades, at least two people have disappeared from this inn. Tonight, unless Hope unravels a century’s worth of clues, death may collect several more lives, including her own.

“This novel demonstrates familiarity with the conventions of mysteries without being constrained by them and with the realities of Canada’s medical world. Although the tone is light, the author is not afraid to introduce darker themes. The three intertwining mysteries and Hope herself provide a narrative by turns entertaining and insightful.

MELISSA YI is an emergency physician and award-winning writer. Her Hope Sze thrillers

have been recommended by The Globe and Mail, CBC Books, and The Next Chapter as some of the best Canadian suspense novels. Scorpion Scheme was a finalist for the Killer Nashville Silver Falchion Award for Best Thriller. Yi was shortlisted for the Derringer Award for the world’s best short mystery fiction. Under the name Melissa Yuan-Innes, she also writes medical humour and has won speculative fiction awards. http://www.melissayuaninnes.com/ Melissa will host a virtual speakeasy to celebrate her latest Prohibition-inspired thriller, White Lightning, on December 1, 2021 at 7:30pm ET (https://www.library.cornwall.on.ca/events/virtual-speakeasy-book-launch-white-lightning-melissa-yi).