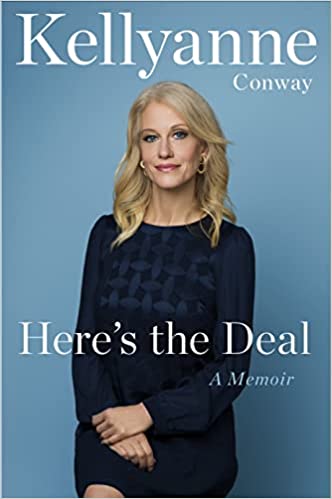 Threshold Editions, an imprint of Simon & Schuster, will publish HERE’S THE DEAL: A Memoir by Kellyanne Conway on May 24, 2022.

Kellyanne is one of the rare people who are often referred to by their first name alone. The first woman in American history to manage a winning U.S. presidential campaign, and the highest-ranking woman in the Trump White House who had the same job from day one until the day she left, counselor to the president Kellyanne Conway survived four press secretaries, four national security advisors, eight communications directors, and four chiefs of staff. Untouched by any of the major scandals or investigations of the administration, she voluntarily departed her White House post in summer 2020 to spend more time with her family.

HERE’S THE DEAL is a behind-the-scenes look at the workings of the historic 2016 Trump-Pence campaign, and the Trump Administration: details about strategy and decision-making, power struggles, family dynamics, and a one-of-a-kind perspective about Donald Trump.  It also reveals the woman behind the name: a girl from working-class South Jersey raised in an all-female household who packed blueberries every summer for pennies a pint, became valedictorian of her Catholic high school, earned her law degree, returned to polling during the historic 1994 election cycle, and by twenty-eight had launched her own polling and consulting firm in Washington DC.

Not just the story of the White House, HERE’S THE DEAL takes the reader inside Kellyanne’s own house, on her own terms. Kellyanne became a fulcrum between the see-sawing demands of a West Wing job in one of the most consequential eras in our history, motherhood to four school-age children, and marriage to a man who suddenly went from an ardent supporter of his wife and the President to one of the administration’s most caustic and constant public critics.

Understanding Donald Trump is a skill very few people mastered during his tenure in the White House. Even fewer questioned and challenged him. Kellyanne Conway did it respectfully, forcefully, and with varying degrees of success, as she details in this eye-opening and intimate memoir. HERE’S THE DEAL is both a revealing and sometimes astonishing glimpse into the Trump presidency and a memoir of persistence and perseverance.

“Long before I joined the Trump campaign and White House, I’d made a career out of calling things as I saw them, with no notes in front of me and no net beneath me. I brought that same approach to this book, which should engage, engross and entertain plenty of people,” said Kellyanne Conway.