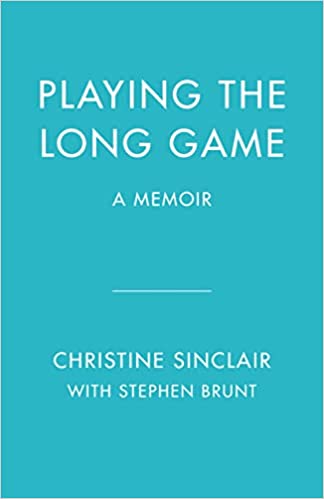 For the first time in depth and in public, Olympic soccer gold medalist Christine Sinclair, the top international goal scorer of all time and one of Canada’s greatest athletes, reflects on both her exhilarating successes and her heartbreaking defeats. Playing the Long Game is a playbook of earned wisdom on the value of determination, team spirit, and real leadership that changed the landscape of women’s soccer.

Christine Sinclair is Canada’s captain and one of the world’s most respected and admired athletes. Not only is she the player who has scored the most goals on the international soccer stage, male or female, but more than two decades into her soccer career, she is still the heart of any team she plays on, captaining both Canada’s national team and the top-ranked Portland Thorns FC in the National Women’s Soccer League. Sinclair continues to execute her game plan progressing step-by-step to reach the top of the podium and inspiring her teammates to long-term glory.

Working with Stephen Brunt, who has followed her career for decades, the intensely private Sinclair will share her reflections on the significant moments and turning points in her life and career, the big wins and losses survived, not only on the pitch. Her extraordinary journey, combined with her candour, commitment and decency, will inspire and empower soccer fans, and girls and women everywhere.

Anne Collins says, “I think everyone in Canada carries an indelible and inspiring image of Christine Sinclair in our hearts, from winning Gold at the Tokyo Olympics, or leading an underestimated team to bronze at the London Games, or so many other matches on the international stage. She is hugely respected and admired, and it will be a complete privilege and a revelation to publish a book that opens a door for readers on what most matters to her and what inspires her.”

Christine Sinclair says, ”At this point in my career, I am proud of many things but most of all, the role my teammates and I have had in strengthening Canada’s position in the sport world and changing the landscape of women’s soccer forever. I can’t wait to share my experiences in this book.”

The timing of the book coincides with significant attention to Christine Sinclair and to women’s soccer around the world. Sinclair has committed to playing for the Portland Thorns FC in the NWSL and to captaining the Canadian squad for the next two seasons leading up to FIFA Women’s World Cup 2023. Beyond titles and medals, Sinclair has set her sights on continuing her impact on the game and the goal of equality with the men’s and women’s game in Canada.

CHRISTINE SINCLAIR is the long-time forward and captain of Canada’s national soccer team and the Portland Thorns FC of the National Women’s Soccer League. An Olympic gold medalist, two-time Olympic bronze medalist, CONCACAF champion, and 14-time winner of the Canadian Soccer Player of the Year award, Sinclair is the all-time leader for international goals scored for men or women, with 188 goals, and is one of the most-capped active international footballers with more than 300 caps; she has played and scored in five FIFA Women’s World Cups. Born and raised in Burnaby, BC, she lives in Portland, Oregon.