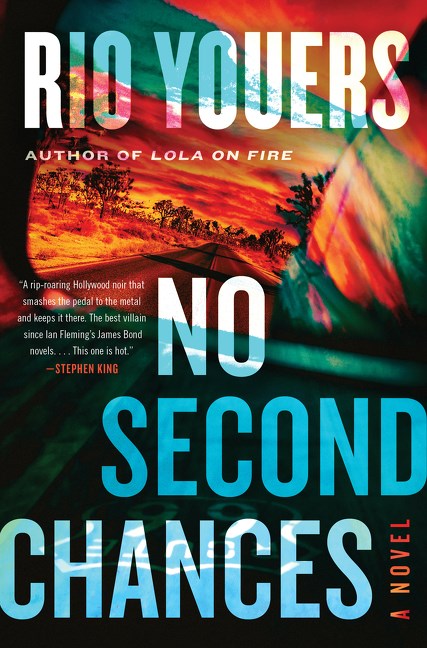 NO SECOND CHANCES BY RIO YOUERS

From the acclaimed author of Lola on Fire comes a blistering novel of action, intrigue, and suspense about a down-and-out actor suspected of killing his wife, a wannabe starlet new to the L.A. scene, and the vengeful drug dealer they both dare to cross.

Luke Kingsley’s glory days are in the rearview mirror. Once an up-and-coming actor, his career hit the skids after his wife—the famous R&B singer, Lisa Hayes—disappeared without a trace. Their relationship was very public, often tempestuous, and most people, including a determined ex-detective, are convinced he got away with murder.

Luke fervently maintains his innocence. One of the very few people who believe him is his friend and confidante, Kitty Rae. But Kitty hasn’t been entirely honest with Luke. He thinks she’s a courier, delivering important correspondence to businesses around Los Angeles. In reality, she’s running product for the notorious Johan Fly, powerful social media influencer and drug dealer to the rich and famous. Johan is young, handsome, and dangerous—the entitled son of a Danish billionaire. And when Johan discovers that Kitty has been skimming, he vows to make her pay.

As Luke steps up to help Kitty, he uncovers a web of violence and corruption, as well as a single, enticing clue about his wife’s disappearance. Blazing across the Mojave Desert, Luke and Kitty set off to find the long-lost Lisa. But Johan, hungry for vengeance, is hot on their trail, and he won’t stop until he finds them.

A high-octane thriller from acclaimed author Rio Youers, No Second Chances pulses with non-stop action and shocking twists and turns as it delves deeply into loss, love, and the precarious pursuit of fame.