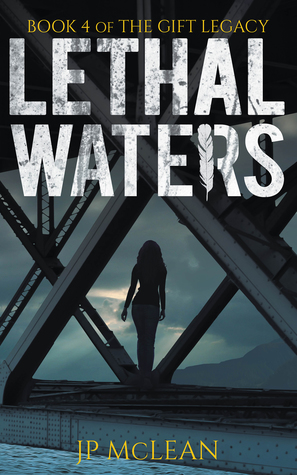 After a series of events forces her to take on the role of an undercover agent, a young woman with extraordinary gifts finds herself in the midst of a drug investigation that includes murder, all while trying to keep her gifts hidden from the world in author J.P. McLean’s “Lethal Waters”, the fourth book in The Gift Legacy series.

A body in the water. A vast ocean. A killer on the loose.

In the midst of a bloody rebellion, Emelynn Taylor exposes her gift of flight to save a man’s life. Now International Covert Operations knows her secret. The powerful organization is willing to cover up the carnage and protect her secret—in exchange for her services.

Her first assignment, a drug case in the coastal city of Vancouver, soon reveals a grisly murder that implicates one of her own kind.

Stalked by the ancient Tribunal Novem and vilified by a distrustful team of detectives, Emelynn takes on a perilous undercover role embedded in a drug ring where anyone could be the murderer.

Intrigue and danger lurk in the cold Pacific, challenging Emelynn’s unique gift and pitting her loyalties against her honour. And her choice is guaranteed to hurt someone.

The fourth book in The Gift Legacy series, Lethal Waters is a thriller that skirts the edges of reality in a world within our own. Don your life jacket and escape the ordinary: take flight with Emelynn Taylor.

(Lethal Waters was previously published as The Gift: Penance)

I am a massive fan of this series. I always love seeing the author naturally blend the events of the previous books and the events that individual characters have undergone into the narrative without feeling like a summary and instead more of a natural progression of the modern story. The characters continued to evolve the history and mythos of those with her gifts while turning more into the mystery aspect of the narrative. Emelynn’s turn as an undercover agent of sorts, brought in unexpectedly into an investigation after a series of synchronicity style events puts her in the investigation’s path, added a depth of intrigue and mystery that readers are going to absolutely love.

The descriptive narrative the author utilized here really brought this world to life in the reader’s mind. The action and suspense of who the main players in this investigation were and who could be trusted added a burst of adrenaline as the events began to pile up one after the other for Emelynn.

Entertaining, heart-pounding, yet highly thoughtful in its approach to the mystery, author J.P. McLean’s “Lethal Waters” is a must-read novel and the perfect addition to this growing series. The action and mythos really will keep readers on the edge of their seat, while the new direction the author takes the protagonist will breathe new life into this fantasy universe, making this a book in the series that is not to be missed. If you haven’t yet, be sure to grab your copy today!