Search
Home Blog BEHIND THE WORDS WITH ELLE MARR 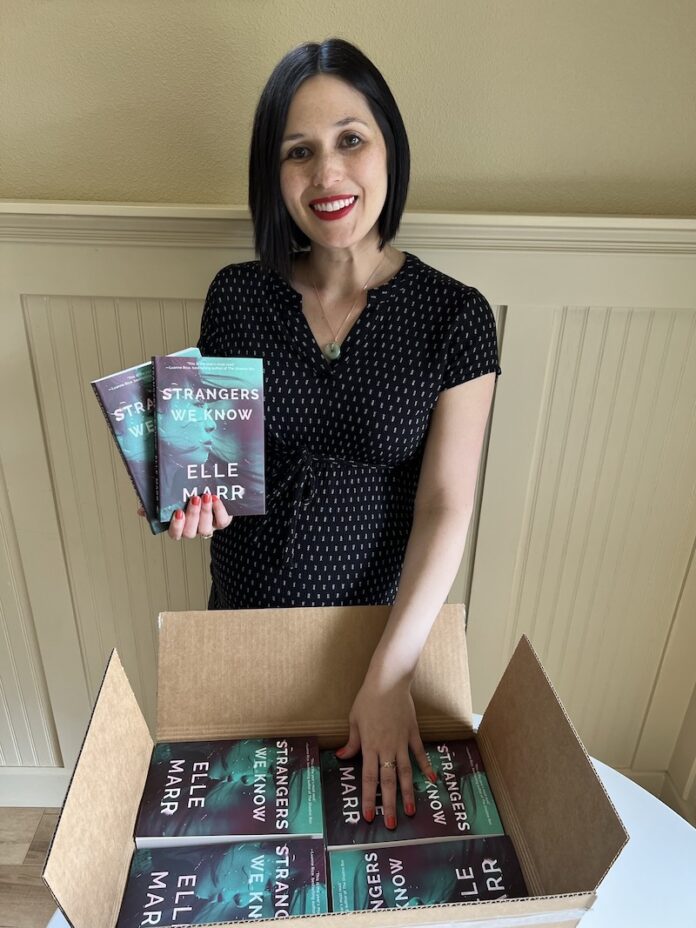 Welcome to Behind the Words, Elle! We’re excited to have you. For reader’s who don’t know this author; Elle is the author of thrillers, THE MISSING SISTER (2020), LIES WE BURY (2021), and STRANGERS WE KNOW (May 2022), and THE MISSING SISTER was a #1 Amazon bestseller,

Let’s get to know you! First, tell our readers a bit about yourself.

I’m a thriller novelist who can’t watch horror movies anymore! I used to watch them regularly, but ever since having kids, it’s been less of a priority. I’m from Sacramento, California but currently live in Oregon with my family. It was while spending a few years in France, teaching Sociology and Psychology, that I first began writing novels, then never looked back. My fur-baby is an American tabby that I adopted about 5 years ago, named Kiki. She’s extremely supportive of my writing career, and often curls up next to my feet while I edit.

When writing a new book, I carve out time during the day wherever I can. For me, so much of putting a new idea to paper is simply spending time with the characters and mulling over a plotline — things that I can’t shortcut. With a toddler, that can be extremely difficult, so I have to remain flexible in my windows of productivity — writing thirty minutes here and there, or waiting until the kiddo goes to sleep and then really attacking the pages. My preferred writing time would be during the mornings, but often that’s only possible on the weekends. However, when I’m not writing, I like to read one or two books at a time — for research for the next novel and another for fun, to diversify my bookshelf and support authors I admire. 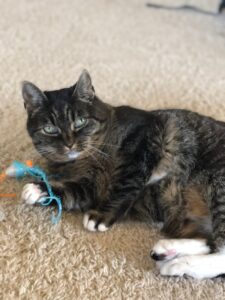 STRANGERS WE KNOW follows Ivy Hon, who was adopted as a baby, who then takes a genetics test to try and learn more about an undiagnosed illness that has baffled her doctors. But, the results attract the FBI, who share that, according to Ivy’s DNA, she’s related to the Full Moon Killer, a predator who has terrorized the Pacific Northwest for decades. When an online search connects Ivy with her younger cousin, she heads to Rock Island, WA to meet the woman, motivated by a secret desire to unmask her murderous relative. There, Ivy discovers her mother’s tragic fate and her father’s disappearance, and as Ivy ventures into a serial killer’s home territory, she realizes that she may be the next victim of poisonous blood ties.

The inspiration was a combination of true crime revelations fueled by DNA testing — similar to the Golden State Killer’s conclusion — as well as my own personal experiences. I grew up in Sacramento, the stomping grounds for the GSK, and was shocked to learn later as an adult that the East Area Rapist, as he was then known, had never been caught. Years passed, then the GSK was arrested and identified in part thanks to genetics testing. When that happened, I began piecing together a story with that situation at its heart, knowing it’s an idea that many people have considered themselves: what revelation might I learn through submitting my genetics test? When I submitted my own spit sample to a genetics testing company, I nervously waited for the results, both curious and concerned at what they might be. Ivy Hon, the protagonist of Strangers We Know, has that same experience, and I drew on my own thoughts for her mindset.

Yes, definitely. My main character, Ivy Hon, is a woman looking for answers after losing both her adoptive parents. As the child of an adoptee, I identify with Ivy’s desire for clarity and the determination she demonstrates to go get it. I also strongly identify with her love of binge-watching Netflix shows, while exercising her amateur sleuth instincts. I don’t always consider my characters people that I’d be friends with, but Ivy is one of them.

It’s funny because my instinct is to say all of Samson’s chapters, as his mindset is an unusual one. However, I think I’d say Tatum’s chapters were the hardest to write overall, as she experiences such a range of emotions in such a short time, after giving up her baby for adoption. My three main characters, Ivy, Samson, and Tatum, each experience their own tumultuous journey, and in order to make those journeys authentic, I must really dig into the psychology behind them. That can be challenging, but when done right, it’s so rewarding for me.

I did, actually. Ivy’s cousin, Lottie Montagne, is inspired by an old friend of mine who has always exuded warmth and hospitality to all. Lottie’s appearance is somewhat inspired by my friend as well, so let’s see if my friend notices!

My mother is an adoptee, so I grew up with the knowledge of both how special that status can be and also how full of mystery, for some. It was always an aspect of my history that I found intriguing. When I first got the idea of exploring the ideas behind Strangers We Know, I knew I wanted to weave in my own experience as the child of an adoptee, and also as someone who submitted their own DNA sample to a major testing company. Eventually, I found many answers to my lifelong questions, after meeting several biological family members, but others remain. I tried to imbue Ivy’s motivations with that desire for clarity.

Absolutely. Gillian Flynn was the first thriller author to really grab me and cause me to turn each page feverishly. I strive to emulate her amazing plotting in my stories. Also, Stephen King is an author I discovered when I was a kid, and I’ve always admired his clear, concise sentences to paint a scene.

I’ll write anywhere, with any background noise. That might change, but for now I’m grateful I’m able to zero in on a page, regardless of my environment. A few key resources for me are my airpods and a hefty bag of Hershey’s kisses.

I don’t know if it’s under-appreciated but I am a huge fan of LITTLE VOICES by Vanessa Lillie. This thriller suspense published in 2019 and was given lots of great trade and reader recognition, and I’m always recommending it. The writing is excellent and the final twist in the end will have you re-reading from the beginning to savor the breadcrumbs.

Honestly, I’m not sure how secret it is, but I speak fluent French after living and studying in France for three years. I always wanted to learn a second language and when the quarter-life-crisis came calling, I sold all my things then packed up and moved to Europe. It was certainly an adventure, and one I have zero regrets about.

That would have to be excessive sub-plots. When I’m initially drafting a story, I like to let my imagination go wild and search for the most unusual conclusion. Most of the time, I manage to rein the divergent storylines in by the time I send my manuscript to my editor — but I am grateful for my team’s critical eyes that tell me when I missed the mark.

“If you weren’t writing the genre that you are, what would you write?” I love writing thrillers but if I chose a different genre, I’m a huge fan of historical fiction. Being immersed in a by-gone world is the closest thing to time travel that we have, and it’s always entertaining for me to explore a setting that’s passed.

Thank you so much for joining us today, Elle. How fascinating using your mother’s past to create a great novel.

Here’s a quick look at STRANGERS WE KNOW:

LEARN MORE ABOUT ELLE AND HER BOOKS ON HER WEBSITE