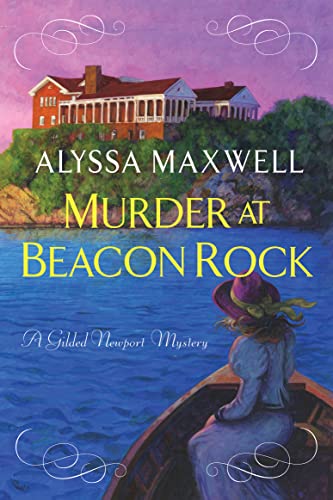 As a reporter, Emma is used to covering Newport’s social events. But this time she is appearing on the arm of her fiancé, Derrick Andrews, at a small but exclusive gathering of the New York Yacht Club at Beacon Rock, the Grecian-inspired summer “cottage” of Edwin and Elizabeth Morgan. The members—which include cousin and Yacht Club Commodore John Pierpoint Morgan and widow Lucy Carnegie, the first woman to be admitted to the Club—are there to discuss their strategy for the next America’s Cup Challenge, to be held in New York Harbor the following summer.

But it’s Emma who must come up with a strategy when she discovers a woman’s body bobbing against one of the hulls of the boats moored at the base of Beacon Rock. Is it possible she fell from the Newport ferry and was carried by the tide? Or could she have drowned herself or fallen victim to foul play?

After the woman is identified as the missing daughter of a yacht designer, the police—with the exception of Emma’s friend Detective Jesse Whyte—hastily conclude she is a suicide, perhaps to quiet any scandal for the Morgans, since her body was found floating near their property. But Emma suspects the woman was murdered and begins to sort through a who’s who of sportsmen, boat crews, and the Newport elite in search of a stone-cold killer . . .