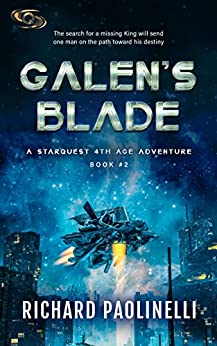 California author Richard Paolinelli began his writing career as a freelance writer/photographer, then served as a sportswriter and news/political coverage/ business writer, and now writes novels. His stories have been published in thirteen anthologies (such as Planetary Anthology, a Sherlock Holmes collection, and Cracked) and to date he has published thirteen novels, the latest of which is GALEN’S BLADE, the second volume of his Starquest 4th Age series. His chosen genre is science fiction under the influence of the spectacles of Space Operas.

This novel is Paolinelli’s nod to author John C. Wright, the creator of the Starquest Universe and the platform upon which this epic is staged. Indicative of the author’s ability to engage the reader’s interest and provide a portal through which the tale begins is obvious as he opens Book 2: “I’ve got a bad feeling about this.” “Aw shut yer yap, Smerg,” Ailden Cloo snapped form the pilot’s chair, keeping a sharp eye out the forward viewport at the Alliance ships hanging in space only a few kilometers away. He needed to keep their ship, an old rust bucket ironically called, Silver Bird, hugging close to a tumbling asteroid so the fleet would not spot them, while also being able to keep said fleet in sight. The last thing he needed right now was to listen to Smerg’s nervous, non-stop chattering. The more nervous Smerg felt, the more he chattered and the gloomier his chatter became…’

Paolinelli outlines in the story succinctly: ‘While Dwyn lies in stasis, recovering from his injuries in his stand against Harmool’s fleet, Rhea has assumed the title of Regent of Salacia while leading the search for her missing father, King Iodocus. She is also helping repair the damage done to the Alliance in her Uncle’s and Mother’s mad quest to launch a new Empire. A shocking assassination attempt is thwarted at the last second by Dwyn, who seems to be a changed man now that he has exited stasis to save his love. The King’s location is ascertained and a rescue mission mounted to retrieve him from the Wilds, a lawless area of space. An ambush splits their forces and Dwyn leads the ambushers away so that Rhea and her father can escape. Before Dwyn can find a way back to Alliance territory, an old enemy returns from the grave, and hold Rhea and the King hostage, while triggering a massive insurrection that overthrows the Alliance and installs a new Emperor. Dwyn must now mount a second rescue while finding a way to rally a rebellion against this threat to peace in the Hominids’ corner of the Andromeda Galaxy.’

The colorful prose manages to seduce our imagination into his galaxy and retain our attention to the myriad details he relates with a fresh sense of wry humor to the very end. This is a space opera that deserves a hearty welcome – a promise that this author’s skills deserve attention!