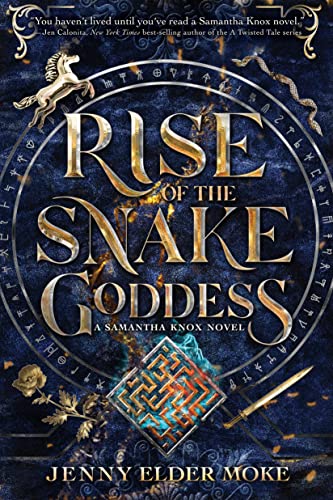 Rise of the Snake Goddess by Jenny Elder Moke

The beautiful island of Crete, an archaeological find for the ages, and one seriously pissed-off Greek goddess. It’s just another day for Samantha Knox.

After being snubbed by her college’s archaeology department for an honor she rightfully earned, Sam is hell-bent on proving her worth to her misogynistic department head. So when an opportunity presents itself to solve the hidden meaning behind a symbol found inside a cave in Greece, Sam is all over it, and she’s bringing Bennett and Jo with her for the cross-Atlantic trip. Once on the island of Crete, Sam finds a treasure she never expected—the golden girdle of an ancient and powerful goddess, and she can’t resist its siren call, or the accolades she would win for discovering it. But before she can take credit for the find, the girdle is stolen and the island is hit with a series of earthquakes that don’t feel quite coincidental.

Soon Sam, Bennett, and Jo are embroiled in a wild hunt—one that takes them to tiny island shops, a glamorous high-stakes auction, and a fiery near-death experience—to find the girdle before someone can use it to raise the ancient goddess from her slumber. An unexpected heist, a terrifying trek through a labyrinth, and a fight to the death with the Minotaur itself lead to a final standoff she and her friends won’t soon forget—one that might just break up Sam and Bennett for good.

Set against the gorgeous backdrop and ancient ruins of the Greek islands, the pulse-pounding action in this twisting mystery will appeal to action-adventure fans, romance die-hards, and mythology buffs alike.