Search
Home Blog BOOK REVIEW: Barbarians of the Beyond by Matthew Hughes 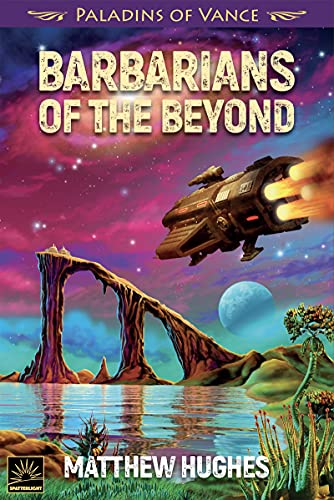 Barbarians of the Beyond by Matthew Hughes

Canadian author Matthew Hughes is an award-wining writer of space opera science fiction fantasy. To date he has won the Crime Writers of Canada’s Arthur Ellis Award, the Endeavour, and several others. Having been influenced by the famous California sci-fi author Jack Vance (1916 – 2013), Matthew ‘continues’ the epic influence of Vance’s ‘Demon Princes’ series with this novel – BARBARIANS OF THE BEYOND.

Inviting readers into this fantasy world, Matthew provides a Prologue of background history – “In the late fifteenth century (New Reckoning), some three hundred families left Earth, heart of the interplanetary civilization of the Oikumene, for a sparsely settled world, Providence, in the largely lawless Beyond. Led by a utopia-inclined minor aristocrat, they established a farming colony in a place called Mount Pleasant…The town and its surrounding farms eventually came to support a population of more than five thousand. Providence was one of the many worlds in the Beyond whose inhabitants paid forced tribute to five master criminals of the Beyond…the Demon Princes…’ Portal opened and the space opera begins.

Tightly compressing the story line, the synopsis reads – ‘Twenty years ago, five master criminals known as the Demon Princes raided Mount Pleasant to enslave thousands of inhabitants in the lawless Beyond. Now Morwen Sabine, a daughter of captives, has escaped her cruel master and returns to Mount Pleasant to recover the hidden treasure she hopes will buy her parents’ freedom. But Mount Pleasant has changed. Morwen must cope with mystic cultists, murderous drug-smugglers, undercover “weasels” of the Interplanetary Police Coordinating Company, and the henchmen of the vicious pirate lord who owns her parents and wants Morwen returned. So he can kill her slowly…’

For those who have honored Jack Vance’s fantasy realm, Matthew Hughes offers a wholly satisfying ‘continuation.’ But make no mistake – Matthew’s richly descriptive and innovative writing places him on a special throne, a position he now fills amply. This is a very fine new space opera novel that whets the appetite for more. Very highly recommended.