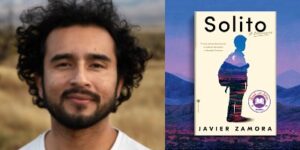 JAVIER ZAMORA’S SOLITO: A Memoir, published today by Hogarth, was named the September Read With Jenna Book Club Pick on NBC’s Today Show! Solito is the unforgettable story of Javier’s migration from El Salvador to the United States at the age of nine—a moving, page-turning memoir hailed by Sandra Cisneros as “the mythic journey of our era.” After a decade of publishing innovative and award-winning fiction, Hogarth is launching its first non-fiction list with Solito.

In making her book club announcement, Jenna Hager Bush said, “I don’t think I’ve ever read a memoir which captivated me in so many ways…It was a beautiful book about family, those that we have and those that we make, and the little family that they made on their journey, which was almost sort of “Iliad”-esque. An epic journey to their loved ones, because they had no choice.”

Javier Zamora commented:
“I want to thank everyone at PRH who has helped with SOLITO. My life the way it is now wouldn’t be possible without you. Having my story published, honored, and listened to in a way that makes me proud has been a decades-long dream of mine. All of you are a part of the continuation of my journey and my healing, and together we are changing the culture of our current world—especially in terms of conversations surrounding migration. I’m proud and honored to be a part of the PRH-Hogarth team. Un millón de gracias! Woooo! Pinch me!”

Hogarth VP & Editor-in-Chief, David Ebershoff said: “When I first read the manuscript of Solito, and reached its final, unforgettable page, I wanted nothing more than to publish Javier Zamora and help share his story with the world. Since then many, many colleagues across PRH have worked passionately and creatively to bring Solito to readers, and all of us at Hogarth are extremely grateful. After a decade of publishing groundbreaking fiction like Normal People and The Vegetarian, we are launching our first non-fiction list with Solito, with many extraordinary books to follow.”

A selection of reviewer praise for SOLITO:

“Zamora, a poet, recounts in absorbing detail the dangerous, weekslong journey he took from El Salvador to reunite with his parents in the United States when he was just 9.“
—New York Times (One of September’s Most Anticipated Books)

“While reading Solito the new memoir by poet Javier Zamora, it’s hard to reconcile the fact that this book hasn’t always been with us. How can something so essential and fundamental to the American story not already be part of our canon?”
—San Francisco Chronicle

“Zamora’s storytelling is crafted with stunning intimacy, and you‘ll feel so close to the boy he was then that you’ll think about him long after the book is done. It’s impossible not to feel both immersed in and changed by this extraordinary book.”

“Solito is a stone-cold masterpiece, an absolute masterpiece. I know I used that word twice. That’s how you know I mean it.”—Emma Straub