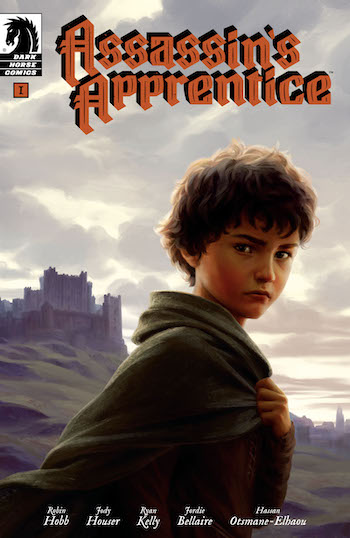 Witness the story of ‘Assassin’s Apprentice’ told like never before

Until recently, Fitz was only known as “boy.” The illegitimate son of a powerful noble, Fitz is taken in by his uncle, Prince Verity, who prepares the boy for a journey to the capital to meet his royal grandfather. But Fitz is not a normal child. An ancient power stirs inside him, something that will change the destiny of the Six Duchies forever!

“Hobb is the author whose books Martin described as ‘like diamonds in a sea of zircons,’ the writer to press on those who turn up their noses at fantasy. Her writing is superb, her world-building irresistible, her storylines both hell-for-leather exciting and deeply introspective.”—The Guardian

“I would highly recommend Assassin’s Apprentice and the Farseer Trilogy. As you read you become ever more immersed in the story and it just seems to get better and better.”—Fantasy Book Review “An intriguing, controlled, and remarkably assured debut, at once satisfyingly self-contained yet leaving plenty of scope for future extensions and embellishments.”—Kirkus