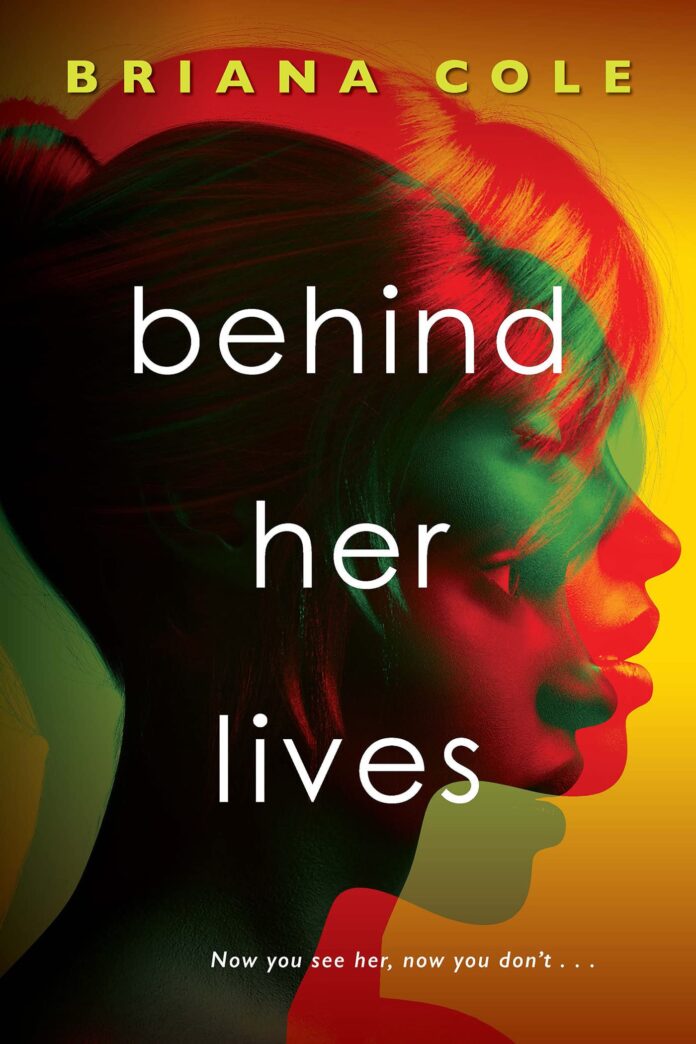 BEHIND HER LIVES BY BRIANA COLE
(Pre-order now!)

“That’s not my sister.” Overwhelmed by shock and relief, those are the only words Deven can muster when she is called to identify the body of a suicide victim. A body she was informed was her sister, Kennedy. But as she stares at the lifeless stranger, she’s filled with questions: Who is this woman? Why was Deven listed as family? And most important, where is Kennedy? Her intuition tells her just one thing: this can’t be a total coincidence.

Desperate to put the pieces together, Deven launches her own investigation. Soon, she finds herself tangled in a web of secrets and lies so twisted that it blurs the lines between fact and fiction.  And between the sister she thought she knew and the one who seems to have many hidden, dangerous lives. But only Kennedy would have the answers to increasingly urgent questions. Just one possibility is clear: Kennedy isn’t missing. Maybe she just doesn’t want to be found. And maybe you can never truly know another person. Even your own sister.

Something was off about today. Deven could sense it.

Her sister called it a devenstinct, her therapist called it anxiety. And her boyfriend “joked” it was borderline crazy (though she’d been particularly repulsed by his comparison). A Navy friend of hers once called it a lull–that calm before the storm. Either way, the moment her eyes flipped open, only seconds before her alarm pierced the eerie silence, she felt disturbed.

Reaching for the clock on her nightstand, Deven fumbled blindly with the buttons, pushing on each until one of them abruptly suppressed the noise. She sat up straight in the bed, shrouded in darkness, her eyes scanning the shadows of her bedroom as if the source of her trepidation would be evident. Deven could make out the silhouettes of her furniture, her mounted big screen TV, the full-length mirror positioned in the corner to catch the perfect angle of the less-than-spacious master suite. Nothing out of the ordinary, it seemed.

As if to serve as a bitter reminder, the mattress shifted next to her. Deven glanced over as the stocky figure turned, the sheets doing little to shield his naked frame. Justin. The memory of last night came barreling back, the images calibrating in and out of focus like a camera lens.

His call had been out of the blue, like all his calls had been for the past six months since the two had begun this long distance “thing” (could she really call it a relationship at this point?). And since he’d been ignoring her calls for days, Deven had wanted to reciprocate the disrespect. But as pathetic as it was, loneliness eclipsed the stubbornness and she had answered on the first ring, accepting the dinner proposal before he’d even finished asking.

Knowing his track record, Deven shouldn’t have been surprised when he’d come over straight from the airport feigning jetlag. Too tired to take her out but evidently not too tired for sex.

Deven was frustrated at his antics. Well, she needed to call it for what it was, downright pissed. One minute, Justin was the doting boyfriend with impromptu gifts and calls. His spontaneity had become a staple and Deven had begun to anticipate arriving home to find him waiting outside, ready to whisk her away to some fancy dinner or event. But then on a whim, Justin requested for his corporate job to transfer him to Baltimore because it was a “better opportunity.” Suddenly, his impulsive nature wasn’t quite as attractive anymore and his decision to leave created more distance between them than the three-hour plane ride. Still, it was clear Justin expected her to go-with-the-flow. His flow. Whether it was loyalty or sheer stupidity, she always did.

Deven frowned as Justin slept on peacefully, completely oblivious to her growing agitation. It was her own damn fault for ignoring her common sense. Now here she was, dissatisfied in more ways than one. On a sigh, she tossed her legs over the side of the bed, suddenly restless and eager for light. As soon as she peeled back the curtains to allow the first strips of the New Jersey dawn to peek through, she immediately felt soothed. And just like that, that ominous feeling was gone, for now. Which was enough to calm her nerves. Thank God. Still, she couldn’t help but chuckle to herself as she looked out at the courtyard of her apartment complex. She was too damn old to still be afraid of the dark.

The apartment was situated in a prime location for Deven’s prying nature. The courtyard was below her second story view, a stone T-shape walkway with benches and picnic tables resting underneath a covered pergola. The walkway was flanked by neatly trimmed hedges opening to plots of gardens that did little to deter the dogs from fertilizing it, despite the sign that clearly read No Dogs in the Courtyard.

A few tenants began to dribble from their apartments, cutting through the courtyard to head to their daily regimens. The two women who worked out together every morning and always dressed in matching yoga pants and sports bras, the family of four that were headed to church in their Sunday best, and the college student who always wore those plaid pajama bottoms since he was usually making a quick run to the neighboring bodega for coffee. Deven should’ve been in her scrubs, ushered right alongside them on her way to work, but she couldn’t bring herself to move from the window. Something was still nagging her. But just like she had deduced only moments before, everything appeared normal.

Deven glanced to the parking lot as a police car pulled in and stopped directly in front of the office. They were probably headed to the couple in apartment A121. It wouldn’t be the first time their domestic violence disputes had gotten out of hand.

She turned her back on the hum of morning activity and watched Justin groan and stretch, the muscles highlighted in his body with the movement. She had to stop herself from staring. Probably one reason why she was in the predicament in the first place. Plus, she had to remind herself that no matter how sexy the man was with his champagne complexion and chocolate brown eyes, that was where it ended. The sex was less than mediocre, or as Deven’s sister once described unsatisfactory sex, “like that sneeze that wouldn’t come out.” Yeah, that was it.

Justin sat up then, the sheets pooling at his waist as he leaned against the headboard. “You working today?” he asked.

Deven sighed and nodded, already dreading the 12-hour shift at the hospital. “Maybe we could go get some breakfast before I go in,” she suggested. The decline in his eyes was prominent before he had a chance to open his mouth again. “You know what, nevermind. Don’t worry about it.” Dismissing her own proposal, Deven turned back around, willing herself to ignore the sting of rejection.

“Aw sweetie, I’m sorry.” Justin rose and crossed the room, closing the space between them. He caressed her shoulders while placing gentle kisses on the nape of her neck. Deven felt her skin warm under his touch. It was a shame he still had that kind of effect on her body. “It’s not that I don’t want to,” he reasoned. “It’s just that, I’m only in town for a few days and I got some running around to do before I head back. But…” His hands were now making their way under her t-shirt to cup her breasts. “You can do me for breakfast–“

The sudden doorbell startled them both as it echoed through the room. Relief had Deven quickly stepping from Justin’s embrace, glancing towards the doorway as if she could see the visitor through the walls. Justin frowned and sharing the curious sentiment, tossed a quick look to the digital clock on the nightstand. 7:23 AM.

“You expecting somebody?” His question had more of an accusatory undertone than Deven would’ve liked and had her rolling her eyes. Did he really have the nerve to be jealous?

Rather than entertain him with a response, Deven shrugged into her robe and belted it at the waist, murmuring a quick, “Be right back,” before stepping from the room. And just because she knew it would raise his suspicions, she closed the bedroom door behind her for more privacy. Pettiness aside, Deven was just as curious as he was about the unexpected house call, so she hurried to answer the front door, flicking on lights as she passed through the hallway. Not bothering with the peephole, Devin flipped the locks and pulled the door open.

She froze, eyeing the two police officers as the first swell of panic ballooned in her chest, tight and suffocating. Now she wished she had’ve made Justin answer the door. Maybe then she could cower somewhere in the bathroom and pretend that these two weren’t here for whatever reason that brought them to her doorstep.

The female officer spoke first, her cinnamon complexion blanched with, what looked to be exhaustion or discomfort, both of which were plausible in her line of work. But still she attempted a smile. “Good morning. Are you Ms. Deven Reynolds?”

Deven felt numb but apparently, whatever head gesture she gave them was satisfactory because the woman continued, taking a tentative step in her direction. “I’m Officer McKinney and this is Officer Wise,” she introduced, motioning to the plump man at her side. “Can we come in for a few minutes?”

Deven’s gaze volleyed between the two, her breath suspended in her throat. The look the officers wore was all too familiar. Working as a Labor and Delivery Nurse, it was unfortunately common to identify when tragedy struck; a twin was stillborn, a wife hemorrhaged during her cesarean, that baby girl didn’t make it out of NICU. Each time, the staff, herself included, carried that same haunted look, eyes pained but hollow with desensitization. It certainly didn’t calm her spirit seeing these two mirror that same demeanor.

Now it made sense. That feeling—that devenstinct—she had been experiencing all morning; like a foreboding pendulum teasing her, taunting her. Deven held her breath and shuffled to the side to let them enter. So much for the calm before the storm. Apparently, the storm had arrived.

Briana Cole is an entertainment mogul in both the book and film industries. Authoring seven novels, including the critically-acclaimed Unconditional series, Briana has also published two novels under Carl Weber with her pseudonym Brielle Montgomery. Briana is the co-Screenwriter and Associate Producer for two urban films, and she has written, executive produced, and co-starred in her own feature film, Pseudo, which was recently acquired by Dame Dash Studios. She has been recognized in a number of popular blogs and magazines, the most prominent being Sophisticate’s Hair Magazine, Publisher’s Weekly, Popsugar, BlackNews.com, and Sheen. In addition to this, Briana is a motivational speaker, mother of three, and active member of Delta Sigma Theta Sorority, Incorporated.