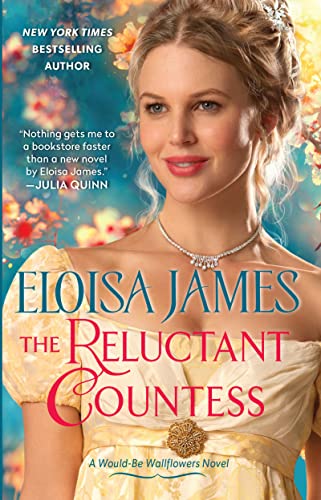 The Reluctant Countess By Eloisa James

New York Times bestselling author Eloisa James returns to the Would-Be Wallflowers series with an enemies-to-lovers romance between a proper earl and an entirely improper lady—whom he can’t stop thinking about.

Giles Renwick, Earl of Lilford, has never made a fool of himself over a woman—until he meets Lady Yasmin Régnier. Yasmin is ineligible for his attentions in every way: not as a wife, certainly not as a mistress (she is a lady!), nor even as a friend, since they vehemently dislike each other.  Her gowns are too low, and her skirts are dampened to cling to admittedly lovely thighs. She loves to gossip—and giggle.

She isn’t dignified, or polite, or even truly British, given that her father’s French ancestry clearly predominated. Not to mention the fact that her mother had been one of Napoleon’s mistresses, a fact she makes no effort to hide.

And what will he do if she says yes?