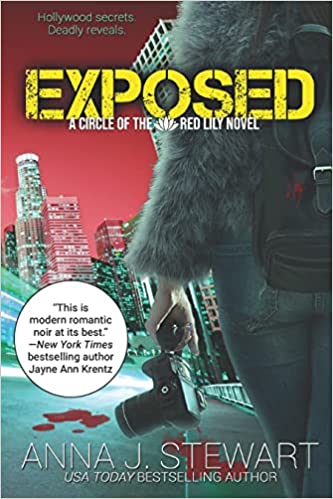 Working as a Hollywood photographer means Riley Temple has seen it all. But then she finds herself staring at the chilling image of a dead woman. When her questions about the film lead to violence, she reluctantly turns to the only person who can help. Detective Quinn Burton, the police commissioner’s son. Her history with the LAPD is complicated, her trust in authority, tenuous. But to find those responsible and protect those closest to her, she’s willing to do anything. Even trust a cop.

After more than a decade on the job, Quinn knows a dangerous situation when he sees it and Riley Temple is up to her ears in trouble. But not for the reason she thinks. The pictures she’s stumbled on call into a question a notorious murder conviction—one that powerful people have a vested interest in keeping in place. Seeing this case through means betraying someone: his job, his family, or the woman he’s falling in love with.

As old secrets are revealed, Quinn and Riley find themselves targeted by members of a secret society that has long maintained violent control over Hollywood’s powerful elite. A society that, until now, has remained hidden in the shadows. A society that will stop at nothing to keep their secrets buried.

“… a page-turner with images that will linger long after you finish the book.” ~Academy Award Nominated Actress & Author Meg Tilly

Anna J Stewart is the USA Today bestselling author of more than fifty sweet to spicy romances. Primarily writing for Harlequin’s Heartwarming (sweet romance) and Romantic Suspense (spicy) lines, she also writes for Arc Manor’s Caezik Romance. In addition to being a Holt Medallion winner (Bride on the Run), she’s finaled in both the Daphne duMaurier, and the National Readers’ Choice. In 2019 one of her books was optioned for television. No matter the story, Anna’s books are always about family—the ones we’re born to and the ones we create.

Anna lives in Northern California where she loves going to the movies, attending fan conventions, and heading to Disneyland, her favorite place on earth. When she’s not writing, she is usually cooking, baking, binge-watching her newest TV addiction, and re-watching her all-time favorite show, Supernatural. She also spends a frustrating amount of time wrangling two monstrous cats named Rosie and Sherlock. You can read more about Anna, her books, and her workshops for authors at www.AuthorAnnaStewart.com.