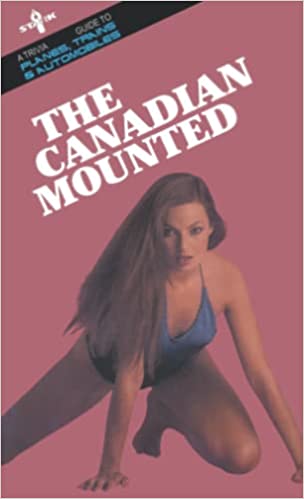 The Canadian Mounted: A Trivia Guide to Planes, Trains and Automobiles By Mark Leslie

‘I got a car, no sweat at all’ – Capturing the behind the scenes drama of a fine movie

Canadian author Mark Leslie is a writer, editor, and bookseller whose publications include poetry, short stories and novels – both fiction and non-fiction. His specialty is horror, ghost, and eerie stories, and as such he has served as editor of science fiction anthologies (North of Infinity II, Campus Chills, Fiction River among them) as well as single books, such as his very popular Canadian Werewolf Series. Now he adds parody and trivia in this entertaining re-imagining of the (pornographic) prop book THE CANADIAN MOUNTED used in Mark’s favorite film, the 1987 John Hughes’ movie ‘Planes, Trains and Automobiles,’ the plot of which he outlines in the first chapter

In his inimitable style of writing, Mark visits the history (and family connections) of the film and then launches into the Prop Book of the novel’s title: ‘If you’re a book nerd like me, or perhaps just someone who has seen the movie countless times, you might have recognized it immediately as the book that Del Griffith is reading when Neal and Del bump into on another at the New York airport where they’re both flying to Chicago.’ What follows is an entertaining and informative exploration of the history of the book The Canadian Mounted, photographs of female models in the book cover’s imagery, comments on punctuation of the movie’s title, the final film – script notations, the musical soundtrack (with detailed soundtrack credits), many excerpts from the script’s dialogue in the original form and in the edited form used in the film, and a section on ‘mistakes, continuity issues, factual errors and other minor blunders’ – and an homage to the cast and crew. Definitely intended for fans of PLANES, TRAINS AND AUTOMOBILES – but also an admirable dissection of a film from inception to completion!