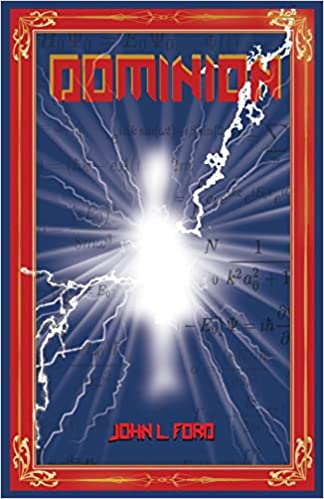 An escape into the analogy of Artificial Intelligence by critically acclaimed science fiction author, John Ford!

Where the corrosive power of time failed, Dominion begins. Unable to wear down the chains of grief left in the wake of losing her and stuck in the quagmire of postmortem morosity, Colton is on the verge of hanging his legacy upon the gallery walls of dimmed mediocrity in the museum of unknown history. Then, it happens.

A flash of insight, as though spoken from the grave, it becomes the guiding light; one desperately needed to reinvent purpose and meaning. It is so much of what she meant to him shining through, that internal voice from the past, that it strikes him with an idea so profound it could only result in the ensuing research. Is it fiction or reality?

Leonardo da Vinci visualized flying machines, and the essential aspects of that ‘fiction’ became fact. And just as the genetics of his ideas evolved into man-made dragonflies and humming birds, Colton Reinholt, a physicist, with a unique mind for synthesis, drafts an idea, too.

Borrowed by observation of actual physiological biology, he uses solid state physics to reconstruct a natural paradigm only ever achieved by evolution’s miracle, the human mind. Thus, what emerges in this physical and ethereal journey simply must carry more than mere soupcon of riveting plausibility.

So, through accelerating technological forces on the world often charging boldly before compunction, we are compelled by our own evolution to satisfy an unstoppable desire for discovery. What is really meant by the phrase, ‘Artificial Intelligence’? This is what we adventure through experimental exploration into the energy of the mind.

What begins as an innocent thought experiment, frolicsome dabbling fuses with technical knowhow and its synthesis results in a fantastic gestalt. By bridging disparate scientific disciplines, it ultimately gives rise to a power that may either become benevolent or malevolent. For despite all human conceits, the answer to the question of good versus evil is not one we are capable to define.

John L Ford is a lifelong fan turned author of Science Fiction. He hails from a background in Natural Sciences having a degree in Meteorology. Owing to the fact that both his chosen literary genre, and his acumen in weather forecasting both offer plethoras of opportunity for fiction … it is quite fitting that any Meteorologist’s creativity would be in the art of the ‘what if.’

His attempt does just that … extrapolate a vision of a world from a foundation of real sciences, pushing plausibility as suspense. This, his first novel, Dominion takes an esoteric aspect of real human biology, mixes it with solid-state physics, and produces an AI that should really force the reader to question its feasibility. Writing this sort of fiction with enhanced feel for explanation perhaps got more than planned for, ..as it was later shown by Sir Roger Penrose, famed Physicist and Mathematician, et al, that the very ‘fiction’ that propels the story, may in fact be real in nature and not so much fictional at all. This novel was written with no formal affiliation or awareness of those real worlds sciences as they were unfolding. Thus, Dominion tells the story of human ingenuity meddling with real Nature in a uniquely suggestive way.

He otherwise keeps his intellect sharp through is professional day job in software technology, as well as occasionally blogging in social media platforms relevant to the above. In between hours given to these, and tears given to heartaches elsewhere, or gazing at clouds he dreams up his next novel.