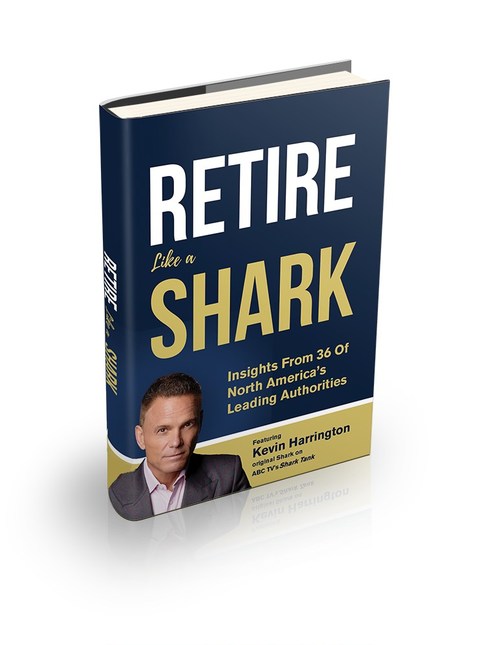 “Retire Like a Shark,” a new book by Scott Keffer; Kevin Harrington, the original Shark on the Emmy-award winning TV series “Shark Tank;” and 34 of North America’s leading authorities reached the #1 bestseller status on Amazon in the United States, Canada, United Kingdom, and Australia in multiple categories, including financial services and free enterprise.

“The unprecedented financial and economic uncertainty has caused even the financially successful to struggle to feel confident. Eight-in-ten Americans (82%) indicate that current events have impacted their retirement plans, according to the latest State of Retirement Planning Study. In Canada, CTV News reported that ‘More than three quarters (77%) of Canadians nearing or in early retirement are worried about their finances…'” said international business growth coach and best-selling author, Scott Keffer.

Achieving total control of your money, maintaining financial independence, and securing your personal freedom and security throughout retirement have always been a challenge. The global lockdown, stock market loses, and looming economic recession have highlighted the critical need to have an integrated retirement income and wealth protection plan built on enduring principles.

“Many people who have successfully accumulated wealth don’t fully understand that the principles, skillsets and resources needed to preserve, protect and pass on that wealth are very different from what it took to create the wealth,” said Scott Keffer.

Keffer continues, “This is our second book together. Kevin and I wanted to assemble an all-star cast of advisors who would each share a chapter on how to retire successfully. Readers get tips from 34 of North America’s leading authorities.”

The book’s co-authors are:

Readers will discover, among other insights:

Besides gaining fame on “Shark Tank,” Kevin Harrington is the creator of the As Seen on TV brand and is a co-founding board member of the Entrepreneur’s Organization. His behind-the-scenes work in business ventures has produced well over $5 billion in global sales, the launch of more than 500 products, and the making dozens of millionaires. Twenty of his companies have each topped $100 million in revenue.

Scott Keffer, CEO of Scott Keffer International, is an international business growth coach, trainer, and best-selling author. As an authority on business growth and results marketing, Keffer has been interviewed on radio and TV and has spoken at most major financial industry conferences. Keffer, known as The Million Dollar Mentor®, has been called an “industry transformer” for his innovative systems and processes. Through his speaking engagements, training, and coaching, Keffer has trained tens of thousands of financial planners, investment advisors, and wealth managers from across the U.S., Canada, and Australia.