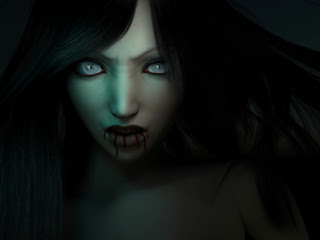 It’s hard to ignore the global phenomenon of vampires. There’s no denying it…vampires are “in”. While Buffy the Vampire Slayer had a devoted following from 1996 to 2003, it was more of a cult following – nothing like the mainstream stars of the vampire world today, such as True Blood, Vampire Diaries and Twilight.

However, what the average Twilight-devotee may not realise, is that there are people who really believe they are vampires. I’m not talking about people who dress-up like vampires; nor am I referring to individuals who think they’re nightwalkers and can only be killed by a stake to the heart. Rather, what I’ll call ‘real-life vampires’ are people who genuinely believe they need to feed on other people’s energy to survive. These types of people have been studied to a certain degree by both the medical and psychological professions, although not in much detail.

So how did I stumble upon real-life vampires? It started as a concept for a crime fiction novel – imagine a victim drained of blood and a local cult of real-life vampires. Are they the killers? However, when I started the research I discovered my fictitious concept wasn’t so fictitious. Turns out LA has a thriving vampire scene – check outwww.ladead.com or for the clubbing scene try www.barsinister.net.


My research turned up two types of real-life vampires – sanguine vampires who feed on blood, and psi-vampires who drain people’s spiritual energy. There are a few explanations to explain claims of real-life vampirism. First off is the blood disorder porphyria, which is treated with haemoglobin, hence the connection to drinking blood. Not only do sufferers need blood, they are also sensitive to light, which gels perfectly with the vampire mythology. Problem is, if you drink blood it goes through the digestive tract and doesn’t enter the bloodstream. In other words, drinking blood wouldn’t alleviate porphyria symptoms. However many of the websites and forums I found suggested that real-life vampires are physiologically different, and have the ability to extract haemoglobin from the blood, even through the digestive process.


Then, there’s the psychological side of things and two major theories have emerged. The first is sexual sadism (vampire) coupled with sadomasochism (donor). By definition, sexual sadists derive pleasure from their partner’s or victim’s physical or psychological pain. Vampires are inflicting pain as they bite.


Likewise, the donors could be seen as sadomasochists – people who need to feel pain to become sexually aroused.


The second psychological explanation for real-life vampirism is Renfield’s syndrome, named after Dracula’s insect-eating assistant Renfield. This psychological disorder is hypothesised to start with a key childhood event that leads the sufferer to find blood exciting. Blood and this sense of excitement is later linked to sexual arousal during adolescence, and into adulthood. However, you’re not going to find Renfield’s syndrome in any version of DSM – the Diagnostic and Statistical Manual of Mental Disorders.


Of course, one simpler psychological explanation is that real-life vampires are suffering from delusions of grandeur. After all, mythological vampires are strong, powerful, perceived as sexy and almost invincible – pretty appealing, huh?


No matter how you explain real-life vampirism, the fact is these people really do exist. Are they suffering from Renfield’s syndrome or poryphoria? Or perhaps they’re simply sexual sadists or delusional. Or is there some other, yet undiscovered explanation for individuals who experience a thirst for blood and other people’s energy?


At the end of the day it’s hard to know what the story really is with people who claim to be real-life vampires. Interestingly, my research did not reveal young Goth males obsessed with the vamp culture. Rather, I found older vampires (although mostly male) who had nothing to do with the Goth scene. And it was unanimous on the forums I visited – they hate Twilight wannabes!

PD Martin – Phillipa Deanne Martin – is a Melbourne-based author with a background in psychology. She has written five novels featuring Aussie FBI profiler Sophie Anderson — Body Count, The Murderers’ Club, Fan Mail, The Killing Hands
and Kiss of Death. Her latest novel, Kiss of Death, was released in August 2010 and is set in the world of LA’s real-life vampires. View trailer at www.youtube.com/pdmartinauthor. She’s also just released an ebook titled Coming Home, which can be downloaded for free from her website.