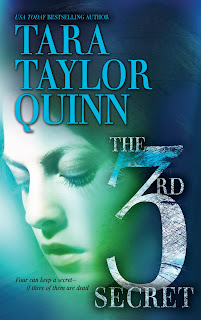 The Third Secret, Book Three of The Chapman Files, MIRA Books, enters the world today!  A stand alone thriller featuring expert witness psychologist, Kelly Chapman, The Third Secret is my editor’s favorite of all four stories.  It’s not nice to pick favorites – like it’s not nice for a parent to favor one child over another.  And so I guess maybe to say this book is a favorite isn’t quite accurate.  The Third Secret just seemed to gel with her personal reading preferences more.  For a chance to Win A Copy Of The Third Secret, leave a comment here today!


I was invited to tell you all about the series here today.  I’ve never been that good about talking up my own stuff.  Kind of like telling all the mothers at the park that your kid is the cutest, most talented one there.  I could no more do that, then shoot not be bothered by hitting a bird with my windshield.  (My kid really was the cutest most talented one there, of course, but I didn’t tell anybody!)


And so, instead of me stopping in to tell you how great I think my book is and why you’ll like it, I’m just going to tell you what others are saying about it:


Romantic Times Magazine
It’s back to small-town life and the files of psychologist Kelly Chapman as Quinn introduces another criss-crossing plot and a shadowy world where nothing is as it seems. All the evidence is unfurled in that twisting line Quinn lays down so well. Readers will be turning the pages far into the night to get to the climax.


Rick Thomas stole evidence from a government facility and served three years in a federal prison. Now he’s free and holding down a job, until he gets charged with a murder and winds up back in a cell.


As a rule, attorney Erin Morgan doesn’t defend bad guys, but her instincts tell her that Rick isn’t guilty and the charges won’t stick. When evidence turns up that proves Rick is lying about something, Erin’s not sure if she’s working with the devil or falling hard for a dangerous man. (MIRA, Nov., 400 pp., $7.99)

The Reading Frenzy
Ms Quinn kept me enthralled throughout this whole novel, I couldn’t turn pages fast enough to find out what was going to happen next. I loved that she included some of Kelly Chapman’s personal challenges that we learned of in the last novel as well as introducing us to our new protagonists for her third in the series. Her plot was inventive and realistic enough to entice even the staunchest crime drama fan and yet gives us a romantic suspense to keep all those fans well satisfied as well. She accomplishes this with a dialogue that enhances all the characters portrayed in the novel. Her characters are exceptionally skilled in who they depict and they are all very important to the story, you will especially hate the villain when he/she is revealed and love all the kind hearted souls who litter the rest of the pages. Her hero Rick and heroine Erin are a couple that her readers will feel compassion for while we’ll also wonder if there will ever be hope for them. The romance is fraught with second guesses, danger and peril in between moments of tenderness and longings. The love scenes are tame by today’s standards but even die hard hot romance fans like me won’t feel let down by them because it just leaves our imaginations to fill in the blanks.


This is an automatic must read for all fans of dramatic romantic suspense, fans of crime drama and mystery fans as well. Those of you who enjoy Carla Neggers, J T Ellison or Brenda Novak will love Tara Taylor Quinn. This novel stands very well alone but I would suggest reading the whole series to get all the details you’d miss otherwise.


Romance Reviews Today
Another fascinating story from the Chapman Files, THE THIRD SECRET is well written with a lot of suspense and a fresh plot.

What a frightening tale!  The story is sure to keep readers interested…THE THIRD SECRET is an excellent romantic suspense from the pen of Tara Taylor Quinn. Marilyn Heyman

Genre Go Round
The third Chapman Files thriller (see The 1st Wife and the 2nd Lie) is a fabulous tale with two prime subplots. Action packed, readers will want to know what the three secrets that Rock conceals are. Whereas the Thomas-Morgan arc is a fast-paced romantic suspense, the Chapman-Maggie segue is a poignant human interest drama; they blend smoothly together. With a strong cast, Tara Taylor Quinn writes a terrific Rust Belt thriller. Harriet Klausner


This post is brought to you as part of The Chapman Files International Blog Tour. Over the next three months, as we celebrate The Chapman Files, expert witness psychologist Kelly Chapman and I are going to be asking for help. If you can, join us in our fight against Domestic Abuse. If you’d like to help, go to www.tarataylorquinn.com and click donate.  Or just comment here to show your support.

There’s an item from our new book, The Second Lie, hidden on the tour with us. Guess the item to enter the drawing to win it! Today’s clue: People Take Them Camping.  Send all guesses to staff@tarataylorquinn.com. To see previous clues visit blog sites listed at www.tarataylorquinn.com. Guess as many times as you’d like!


Don’t miss The Chapman File tour party on December 4th at www.eharlequin.com! We’re giving away a KOBO e-reader and many other cool prizes! All you have to do to be entered to win is leave comments on the tour!


E-books of all of The Chapman File Stories are available for pre-order at amzn.to/bmJzp4.
Next tour stop: Monday, November 1,  2010. Lesa Book Critiques http://www.lesasbookcritiques.blogspot.com.  We hope to see you there! The more blogs you visit with us, the more chances you have to win! Every time you comment your name is dropped in the bag for the prize drawings.

Over the course of my time as a romance reader and writer, I’ve loved diving in to books that are set in the biggest...

I’ve always wanted to stop at those houses that have the neon crystal ball shining in the front window. What’s my future going to...