Ghosts and Their Technology

Don’tcha’ just love all that futuristic technology on television and in movies? What about in books? Love that too huh? Ever wonder how authors, film and TV writers come up with that stuff in those thrillers? Much of the cool stuff happening onscreen is based on novels that invented or enhanced technology you’re watching or reading. I thought, being a thriller author myself, I’d give you a glimpse into how an author—this author—came up with her own ideas for future “cool stuff”. 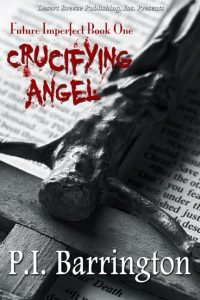 In the last forty or so years, technology, from movies to books to television and video technology has become one of the main characters alongside those beautiful actors who populate the stories people love. Don’t believe me? Think Transformers. Hell, think Blade Runner. Who (for those of us old enough) didn’t think “Wow, that’s cool!” when Rick Deckard (Harrison Ford) called out numbers to his computer that responded by finding and enlarging those particular coordinates of the photo he’d confiscated from a Replicants’ room? Perhaps simple enough these days, but back in 1982, it was pretty cool.

Technology has now also become a major player in crime thrillers, if not downright the star a lot of times. That includes identification technology, explosions, and weaponry.
In my futuristic crime thriller trilogy, Future Imperfect, I grew the technology as the novels progressed. In Book One, Crucifying Angel, the technology was simple, basic and close to what exists today. My computer monitor used actual holography to create a physical 3-D effect along with a programmable house which has long been a hope for future reality by tech developers. 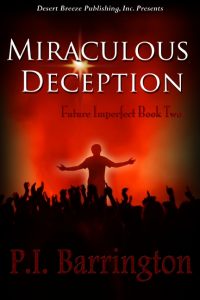 In Book Two Miraculous Deception, and a reviewer questioned it, I created medical machinery that could literally reboot a human’s entire physical body system by a major shock-like wave—not unlike a defibrillator that shocks the human heart to restart it functioning again. The defibrillator is real; my machines are not—at least not yet.

By Final Deceit, the last book of the Future Imperfect trilogy, I created more advanced technology: a portable program device I call Ghoster, which can collect, highlight and identify DNA cells people leave behind wherever they go as well as collect and measure body fluids that are also left behind creating a holographic ‘shadow’ or ‘ghost’ of where the person(s) stood, sat, laid, etc. and how much moisture they left behind. That allows it to also measure a person’s physical and emotional state and how long that person(s) stayed there and when they left. I based all of that on real biology, DNA really is sloughed off and left behind and I’m making an educated guess that moisture is left behind in measurable quantities (think gym smell, lol) as well; that theory, program and device where they can both measure & create vague holographic ‘shadows’ or ghost images left behind is entirely my own invention. I told ya’ I was a geek, lol! But also in futuristic, you can play fast and loose with the real thing. 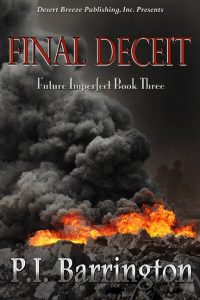 Sedadone foam spray came from my thoughts about truly non-violent crowd control. If you have a thousand snarling people advancing on you and you wanted to incapacitate them all at once (not to mention pissing them off all at once) what would be a fast, all encompassing technique? Well, I didn’t want to injure or cause great pain to that crowd in Final Deceit, so I thought about mass sedation and I wanted a method of fast absorption. Foam seemed the least invasive and could absorb through the skin so that appeared a good way to sedate people en masse. My next problem was how to administer that foam to a huge amount of recipients. I needed something like a giant spray gun that could be adjusted for range and could turn from side to side. A modified military tank popped into my head. I reconfigured the cannon to work like mobile spray nozzle and then came up with the obvious name for the drug, Sedadone, which is pretty much self-explanatory. Here’s a snippet from Final Deceit:

“Caution!” a voice boomed from the tank. “You are ordered to cease crossing police secured areas. Be advised this is fully operational spray cannon and you will be sprayed with sedative-laden foam that will not harm you, but will incapacitate you entirely for one half hour if you do not disperse immediately.”

“That’s brutality!” a shrill male voice shrieked out over the crowd. “Are you getting this, news people? You see what’s going on?”

A faint murmur of assent ran through the mass of bodies like a shudder up the neck. The man with bushy brown hair and beard turned back to the machine. “You can’t do this. There are laws against it!” He turned to the throng already leaning toward the highway as if poised to take a step. “We’ll show you what you can do!” He leaped onto the tarmac fifty feet away from the cannon and the crowd followed en masse.

The cannon barrel swung itself toward them, fixated its target and locked into position with a loud chunk.

“Be advised the Las Vegas Police Department is authorized to use whatever means necessary to maintain civility and order. You are in violation of Codex LV954. Disperse immediately or you will be sprayed with Sedadone.”

“You can’t do that!” the man screamed again and stomped toward the tank. A few others straggled away from the group to follow him and soon the mass grew to dangerous numbers.

“Be advised you will be targeted in fifteen seconds.”

The frenzied mob advanced on the machine, disbelieving.

“Fourteen, thirteen, twelve,” the voice rang out the countdown to no avail. “Ten, nine, eight, seven,” it continued without hesitation. “Be advised you have five seconds to disperse and retreat. Four, three, two–”

The spray met the faces of the first five rows of the crowd, stopping them as they clutched at their eyes, noses, and mouths. The barrel of the cannon could be heard whirring as it positioned itself for a wider shot. The Sedadone foam burst from the barrel, coating the entire sea of people, not missing one. The first fifty people dropped silently to the ground and lay still as if they’d fallen asleep. The rest of the mob followed suit, dropping row after row until no one remained standing on the tarmac, but lay sprawled out over two hundred feet of the old highway. Those handfuls too intimidated to follow the crowd backed up farther, although they were not in the line of fire and not in violation of anything at all.

“Spray cannon disengaged from crowd control and returning to base.” The voice announced from the tank as it backed up in a Y turn and crawled back the way it came.

“Get those people covered!” Charlie ordered the thin number of street cops who broke into runs to pull out and drape huge white sheets of the same material that comprised the temporal phasic suits Las Vegas civil servants were required to don when they worked in the dangerous, unrelenting sunlight longer than the heat ordinances declared safe. “And get the rest of them on their way,” he added, spinning on his heel back toward the crater where another group of people struggled for their lives.

Without giving too much away, there you have it: one author (& geekette)’s guide to technology invention. I hope this small glimpse into a thriller writer’s world will engage you in books on another level of reading pleasure. Don’t make me come after you with enjoyment foam.

After a detour through the entertainment industry, P.I. Barrington has returned to her roots as a fiction author. Among her careers she counts journalism and radio air talent. She lives in Southern California where she watches the (semi-wild) horses grazing in the hills behind her house. She can be contacted via email: wordmistresses@yahoo.com and loves to hear from readers. Her website here. and you can check out her new column, Mental Mondays at Paranormal Wire.