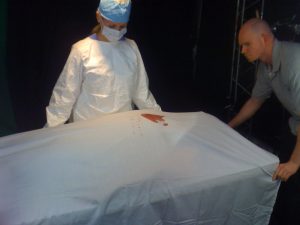 A morgue scene, an empty parking lot scene and a horrific ending that won’t be revealed until the book trailer is released in early May.  New York Times bestselling author Karen Rose commissioned award winning book trailer production company Circle of Seven Productions to create a book trailer for her suspense thriller You Belong To Me which will be released in the US June 7, 2011.

The trailer was shot on two separate days. The first day was the morgue scene which would intro the book like a normal trailer. We see our heroine getting ready for work and then we see she works in a morgue. She’s the ME, Lucy Trask who has as many secrets as an our villain.

Karen Rose chose the actress from a list of actresses cultivated by COS production partner Kyle Lake of Prosper Media.   Kelly Ann Beile of Lexington, KY was chosen for the part of Lucy and bears a striking resemblance to the character’s description in the book.  Playing the part of our dead body is Paul Ryan Richardson who was in a previous book trailer Eye For Glory also shot in Kentucky. 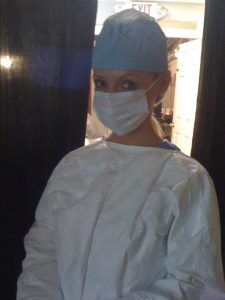 After the morgue scene was shot the crew got back together a few days later to shoot the parking lot scene. It was shot on a Sunday to ensure it would be empty.  The scene included a shot where the heroine, now in street clothes, comes out of the elevator and into the parking garage. On the first take the elevator doors were supposed to close and then reopen so the camera caught her as she came out, but the elevator didn’t respond as expected and when the doors closed the elevator took the actress down to the first floor instead of opening on the fifth.  The accidental elevator-mishap was not the only funny thing to happen on set. The last part of the crew does is capture sounds so the actress had to run in circles around the camera man as he caught sounds of her high heels clacking along the cement of the parking garage. The site was something to behold and to laugh at.

There was no laughing during the scenes where the heroine realizes she may not be alone in the parking garage. And the final shot of inside the car when our heroine finds something inside the car that is just as frightening as anything she could have imagined outside was the true teaser of the trailer. 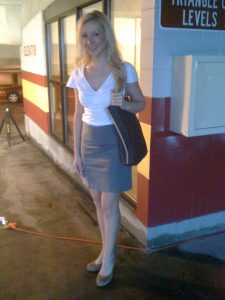 No production is complete without something going awry. It’s an unspoken, unwritten law of production. The one and only mistake made in this production was that the first scene was never supposed to have shot. An error in communication that was nearly comical in the fact that it was never caught over a period of 3 weeks during pre-production, missed that the original morgue scene was to be axed and only the parking lot scene was to be shot. But, the morgue scene shots were so great they were eventually incorporated into the final trailer.

The style of this trailer is very different from anything COS has done previously and so there’s some excitement from within regarding the release of the video. Keep an eye out for You Belong To Me, the book and the trailer!