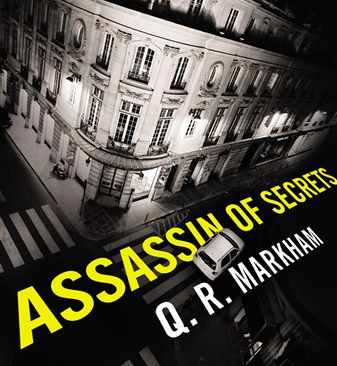 At the beginning of November, Mulholland Books (an imprint at Little, Brown) published Assassin of Secrets, a debut thriller by “Q.R. Markham,” the pen name of an indie bookstore owner from Brooklyn named Quentin Rowan. The novel had a lot going for it: Both Kirkus and Publishers Weekly gave it starred reviews, and there were also had prominent blurbs by respected thriller writers Duane Swierczynski and Greg Rucka. The day the book came out, “Q.R. Markham” had an event at Manhattan’s Mysterious Bookshop, where he took part in a panel discussion led by the legendary Lawrence Block.

Less than a week later, Mulholland declared an immediate recall of Assassin of Secrets, after they were alerted to charges of extensive plagiarism throughout the novel. I’m not talking about bits and pieces, either: Jeremy Duns, a British thriller writer who blurbed the UK edition of the novel, started looking more closely at Rowan’s prose after he learned that James Bond fans had discovered passages that Rowan lifted from one of John Gardner’s authorized sequels to Ian Fleming’s work.

Duns quickly found more plagiarized material from Raymond Benson, Charles McCarry, and Robert Ludlum, until, he says, “I was finding it hard to find sentences that had not been taken verbatim or near-verbatim from other sources.”

The obvious question after something like this happens is: Why? What would compel somebody like Quentin Rowan to so brazenly attempt to pass off a lot of other people’s work as his own? Until he stops avoiding questions from the media, nobody can really say what he was thinking, but I was struck by some of his comments in an interview with the New York Daily News that was conducted before his fall from grace.

Rowan talked about being “disillusioned” by the success of other “wunderkind authors” from Brooklyn like Jonathan Safran Foer, and how working in a local bookstore made him feel like part of the literary scene, but also somehow not—presumably because, at the end of the day, they were celebrated writers, and he was just the guy behind the counter, selling their books. (Which is pretty sad, if it’s true; I know other writers who work at bookstores in Brooklyn, and they’re not anywhere near so insecure about themselves.) “There was a bunch of books by people who were technically my peers that felt showy and one-note,” Rowan added, before noting that he had basically written a thriller for the money.

With the benefit of hindsight, it’s hard not to see in comments like these a thinly-veiled contempt for the book world. Here’s a guy with so much resentment over the success of other writers that he flat out tells a reporter he was willing to “dumb it down” if that’s what it took to get a book deal. Did Rowan take that attitude even further? That is, was he so convinced that the big, commercial publishers are stupid and venal that he could sell them a book filled with other people’s prose and they’d be too ignorant to notice?

Or maybe it was a bold artistic statement? That’s actually a theory put forward by Chauncey Mabe, who suggested that Assassin of Secrets might be a brilliant mash-up of spy fiction that demonstrates the fundamental artificiality of the genre. I suppose it’s possible—Kathy Acker swiped from Charles Dickens and Harold Robbins to much the same purpose, when she was alive—but I don’t get that vibe from what I’ve read of “Q.R. Markham” so far (although I should keep an open mind until I read the entire novel). Kathy Acker’s intent was always openly subversive, and if there is any subversive intent in Assassin of Secrets, it appears to be buried so deep as to be undetectable. Maybe there’s a kind of artistic genius in crafting a message so subtly nobody can actually pick up on it, but I would also think that rather defeats the purpose.

This is all just speculation on my part. Unless Quentin Rowan steps forward to explain himself, though, this sort of speculation is all we have available to try to make sense of his bizarre behavior. And then we’ll ask ourselves, well, how did he manage to fool so many people? But that one’s easy: Most of us do not have all the books we’ve ever read committed to memory, so we’re not likely to spot plagiarism at first sight, and editors generally trust that authors are submitting books to them in good faith, so they don’t automatically assume that they need to vet the manuscripts for plagiarism.

Because they don’t. Because most authors are acting in good faith. The fact that Quentin Rowan was able to game the system, whatever his motivation turns out to be, doesn’t mean that publishing is broken or stupid. If it were, Quentin Rowan really would have gotten away with it, instead of being exposed within a week of publication.