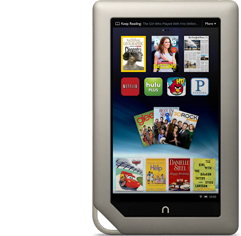 Unveiling the same week as Amazon’s Fire Tablet is the Nook Tablet. The Nook is apparently faster then the Amazon Fire, has 1GB of RAM compared to 512MB in the Fire, and offers streaming video from Hulu Plus. Nook also announced a lower price on the Nook eReader to $199, the same price as the Fire, and their Nook Touch is now $99 and it doesn’t have ads.

Nook noted they are forming some “new content partnerships” with not only video sites, but several music sites, and additional publishers.

Looks like Amazon is getting some competition over the holiday season.

Special Feature Celebrating Mother's Day  Celebrating Mom's with Cari Lynn Webb Today we celebrate moms. And I have been blessed with one of the best moms....
Read more