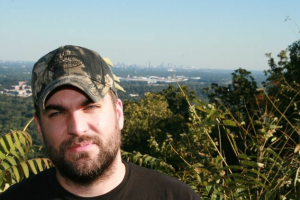 When Charlie went to work that day his biggest problem was his over-bearing mother. Now he’s a hostage surrounded by ruthless criminals with little hope of escape. But there are things about Charlie that are annoying. It’s not like your typical victim you immediately feel sorry for, though you do empathize with him. You want him to live.

This week we interviewed debut author Peter Farris about his gritty crime noir novel, Last Call for the Living.   It is a complex-character-driven story about an ex-con with nothing to lose, a girl who is as crazed for sex as for drugs, the bank teller lucky enough to live, but not lucky enough to be left behind and the agents on their trail who have problems of their own.

Peter talks about crime noir as a genre, what kind of experiences he has had that has brought him to write such dark fiction and how he broke into fiction.