This year’s NY Comic Con was a record breaker with attendance, according to organizers, at 133,000. That’s quite an increase from the Con’s 2006 debut year, where 33,000 attended. The exhaustingly long lines were just one example of the jam packed event.

Branded a New York “Nerd-Fest”, geeks of all kind converged and organizers are speculating that next year, they may have to find a larger venue. Nerds and geeks rule this con filled with graphic novel characters, horror, anime, video games, sophisticated toys, and of course, comics.

Each year the Con adds new panels that appeal to a wider range of comic-graphic and sci-fi/fantasy fans. While the usual Superman, Batman, and Spiderman were in attendance, so were the Walking Dead, The Venture Bros., and numerous gamer franchises. 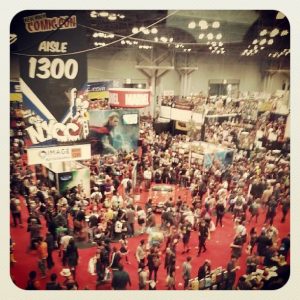 Although, somewhat less ‘Hollywood” then it’s San Diego counterpart, there is a large celebrity segment, a segment that charges. Attendees can get pictures and autographs – for a price. Many celebrities, like Patrick Stewart and William Shatner were garnering $80 for a pic and signature.

Sylvester Stallone, however, charged $395 for an autograph and $445 for a picture. By contrast, the iconic Stan Lee’s fee was a mere $60.

A shout-out needs to be given to a few celebrities, like pro-wrestlers; Tito Santana, Brutus ‘the Barber’ Beefcake, Greg ‘the Hammer’ Valentine and Hacksaw’ Jim Duggan.  They allowed this reporter to photograph them for free. I have a nostalgia thing for the WWF and recall fond memories watching wrestling on WOR channel 9 – NY with my dad as a kid. Actor Ernie Hudson of Ghostbusters fame appeared along with the Ghostbuster car ECO-1 which was parked near the Delorean from Back to the Future, and near Batman’s car, the one used by Val Kilmer. Another truly nice celebrity was actor Jason David Frank, former Mighty Morphin Power Ranger (the Green one!), he was a man who came out from behind his desk, talked, hugged, and generally seemed to enjoy meeting his fans. 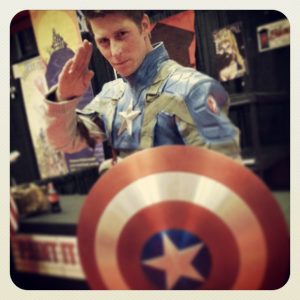 Another truly unique display was the 75th Anniversary salute to Superman with costumes worn by Christopher Reeve, Henry Cavill, and posters and costumes from Dean Cain of Lois and Clark.

If don’t believe that geeks rule this event – the longest line and longest wait was for astrophysicist Dr. Neil DeGrasse Tyson. Mr. Tyson didn’t charge anything for a picture and autograph, and he was by far the 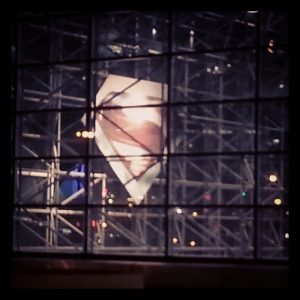 most popular person in attendance.

Of course, it wouldn’t be Comic Con without costumes. The costumes are a show unto themselves. Dressing the part has become such a feature of the Con, that attendees work all year to create the perfect costume. Many of these are so elaborate and detailed, they rival Hollywood’s best. Occasionally, a costume gets the best of its creator. The giant T-Rex that had to be given an escort through the crowd and then with great effort smooshed onto the escalator was worthy of the ticket price.

All Cons have their issues and this one was no exception. The lines were exhaustingly long, the staff  was inept at dealing the myriad of issues any conference presents, and they were very unprofessional. 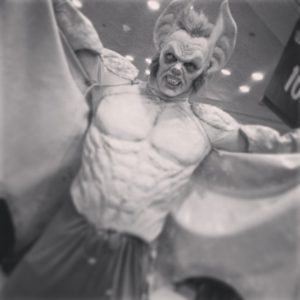 Then there were the panels. This year the organizers adopted a policy to let everyone stay in the area, not clearing the room between panels. This made for excessive crowds and left many people without an opportunity to get into even one panel. Attendees lined up and waited for hours, only to be told 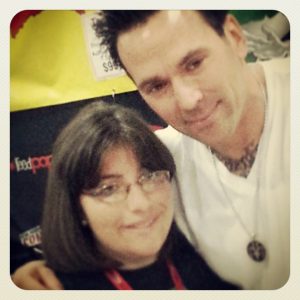 there was no room, as previous panel attendees were not made to vacate the room. Even the press couldn’t gain entrance to most of the panels.

Hopefully, next year, these issues will be resolved. The NY Comic Con is a celebration of some of the best of creative imagination, and it is one of those items that should be included on everyone’s ‘bucket list’. 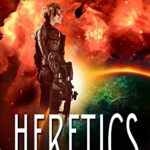