A Madaris Bride for Christmas by Brenda Jackson

A Madaris Bride for Christmas – will hit the stores October 29, 2013 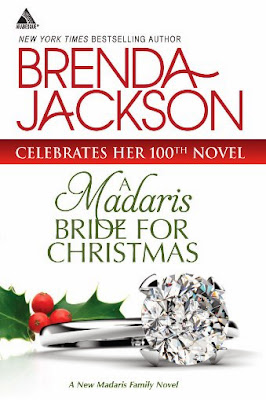 It’s only fitting that bestselling author Brenda Jackson’s 100th book is A MADARIS BRIDE FOR CHRISTMAS (Harlequin Kimani Arabesque Press; November 2013) as she began her writing career with the Madaris family in her first novel — Tonight and Forever. Throughout the years millions of readers have come to love the Madaris family and have made them part of their own.

This November, Jackson brings readers another Madaris family romance. A MADARIS BRIDE FOR CHRISTMAS features one of Jackson’s most unforgettable Madaris heroes yet — Lee Madaris.   Lee isn’t letting anyone control his destiny to find the woman he wants to marry.

But one-by-one, the Madaris men have surrendered to the matchmaking schemes of Felicia Laverne Madaris, matriarch of the family. Lee is determined to bring a bride of his own choosing to the family’s holiday gathering—if only his hotel’s gorgeous new chef will agree to a marriage of convenience.

Brenda Jackson weaves this tale with twist and turns – a born storyteller – romance being the icing on the cake. With this novel, Jackson taps into all of the remarkable storytelling gifts that are the mark of her fiction—polished and confident writing, a sexy spark and characters that burst off the page. A MADARIS BRIDE FOR CHRISTMAS is one of Jackson’s best books yet and a milestone for this bestselling author.

Brenda Jackson, a prolific writer of contemporary multicultural romance novels, is a New York Times and USA TODAY bestselling author.  She is the first African-American female romance writer to become a USA TODAY and New York Times bestselling novelist. Jackson continues to reach new milestones as A MADARIS BRIDE FOR CHRISTMAS is her 100th original work.

“Is there a reason you were dancing alone?”

Carly smiled up at Lee. “Thanks. I was having my own private party of one.”

He tilted his head. “That’s no fun. A beautiful woman should never party alone.”

He was smooth, she thought. As smooth as he was handsome. And she’d noticed he wasn’t wearing a ring. She knew some men didn’t cherish the sanctity of marriage vows, but she did.

“For me that’s no problem. I’m a loner anyway,” she said.

She doubted he wanted to listen to her sob story. She had few friends and had learned early on that the only person she could truly trust was herself. “I prefer things that way. What about you?”

“A loner?” Lee shrugged. “I couldn’t be a loner even if I wanted to. My family’s too big.”

“Really?” she asked. She couldn’t help but envy anyone who belonged to a large family.

The Luther Vandross song ended and they slowly parted. “You’re an excellent dancer,” he said.

“So are you.” She glanced at her watch. “It’s getting late and—”

“You’re calling it an early night on your birthday?”

She chuckled. “Afraid so. I’m checking out of the hotel in the morning.”

“No, I should be thanking you. It was nice meeting you. I hope you continue to enjoy the Grand MD.”

Carly’s gaze held his. She wasn’t sure why she did what she did next. It could have been his scent surrounding her or his overpowering masculinity or his handsomeness—any of them could have been responsible for obliterating any semblance of her common sense.

Before she could talk herself out of doing so, she leaned up on her tiptoes. She only intended to plant a light kiss on his lips, but the moment their mouths touched they were caught in a barrage of desires they could no longer downplay. He pulled her into his arms. Her body pressed against his, and she felt every single inch of him.

Copyright © 2013 by Brenda Jackson.   All rights reserved. Book excerpt reprinted by permission of the author, Brenda Jackson.  This excerpt is used for promotional purposes only. Do not reproduce, copy or use without the publisher’s written permission. Copyright infringement is a serious offense. Share a link to this page or the author’s website if you really like this promotional excerpt.

Order A Madaris Bride for Christmas by Brenda Jackson
http://amzn.com/0373091435

About the Author
Brenda Jackson is a gifted writer who is known for remarkable storytelling – which is a mark of her fiction—polished and confident writing, stories with characters that burst off the page.

Brenda Jackson is a die-heart romantic who married her childhood sweetheart and still proudly wears the “going steady” ring he gave her when she was 15.  Because she began believing very early in the power of love and romance, she can’t help but write stories with happy endings.

She is a New York Times and USA TODAY bestselling author of 100 romance novels and looks forward to increasing that number.  She loves to weave love stories and it is the highlight of her day. Her professional writing career began in 1994 and she has over 3 million books in print.

Over the years she has received numerous awards and made many trail-blazing accomplishments. She was the first African-American author to have a book published under the Harlequin/Silhouette Desire line of books and the first African-American romance author to make USA Today’s bestsellers list and the New York Times bestsellers list for the romance genre.  Her titles continue to hit both New York Times and USA TODAY bestseller’s lists!

She was a 2012 NAACP Image Award Nominee for her 81st book, A Silken Thread.  Jackson has a Bachelor of Science degree in Business Administration from Jacksonville University, and worked for thirty-seven years in management at a major insurance company.

In addition, Brenda is a writer who gives back.  Jackson says, “I believe in the power of education, in honor of my grandmother, ten years ago I established the Josiephine Streater Threatt Scholarship Foundation at Florida Memorial University in Miami Gardens, Florida. Over $150,000 have been donated.”

Brenda would love to hear from her readers. Write her at P.O. Box 28267, Jacksonville, FL 32226. You can also contact her through her e-mail address:  writerbjackson@aol.com.