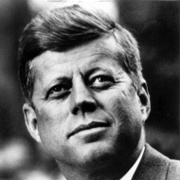 Opening in conjunction with the 50th anniversary of President John F. Kennedy’s assasination, is the “digitized” JFK Presidential Library. The project has been ongoing for the last eight years, and the online ‘opening’ happened this week.

Visitors to the website can play audio recordings, see historic photo’s of the Kennedy White House, listen to tape-recorded phone calls, be privy to closed-door meetings, and “read handwritten notes by the president in the margins of official documents“. There are also hundreds of “never-before-seen pictures of Kennedy and his staff.”

Researchers will find a treasure of historical documents, timelines of world events, and Kennedy’s political career. The site however, doesn’t focus entirely on the political aspect, there are also numerous images, letters, and files about the private man, his life and his family.

One very unique and highly treasured piece of memorabilia is a letter from author Kurt Vonnegut Jr.  Mr. Vonnegut volunteered as part of the 1960 election campaign. He wrote Kennedy, “I’ve published two novels and am a regular contributor of fiction to the Saturday Evening Post, Ladies’ Home Journal, McCall’s, and so on. On occasion, I write pretty well.”

Visitors to the website are also invited to share their memories of President Kennedy, and where they were when he was assassinated. Many tributes from November 22, 2013 honoring Kennedy’s memory will be added to the collection.